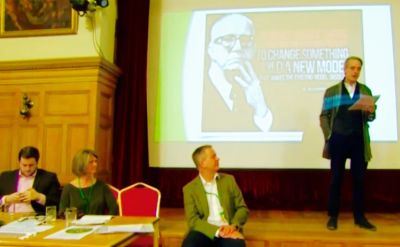 Jeremy Irons is a wonderful onscreen presence. How about in front of a screen though?

Well. Judging by this above screen grab from a BBC news report, not so sparkling.

Yes, it’s dangerous to take only the snapshot served up by the media. Yet there’s plenty to pore over here.

Jeremy campaigns against the building of a half-billion waste incinerator in Gloucester.

During the microclip of him in action, what do we see that we can take onto the Sales stage?

Straight off, let’s not quibble over who may have actually produced the slidedeck. After all, with his long and demanding thespian career can you see Mr Irons using Keynote as his Best Actor Oscar glistens on the desk beside his keyboard?

So the single slide we see is a quote from a global sage.

Sadly, these are nearly always useless.

In this specific instance, how many of the audience do you reckon have ever even heard of the (admittedly marvellous) Buckminster Fuller?

Look at the wisdom itself too.

“You never change things by fighting the existing reality. To change something, build a new model that makes the existing model obsolete.”

Relevance to stopping 70ft chimneys? Even from the most gifted wordsmith’s tongue, limited.

Then there’s the image itself. Black and white, ye olde stock/wiki photo. Red text on a black background. Punchline hidden behind the speakers body.

Surely he knows never to public-speak with your hand slouched in your pocket?

As I touch on already, do you choose to adopt your power-pose right in front of the screen, so obscuring any dynamite message?

And those notes in his hand are not a mere accessory, but vital prop.

When you’re part of a top table panel, it’s essential to put on a united front.

What would you think if a compadre was busy elsewhere in phonespace rather than conveying both enthusiasm and togetherness with your cause?

Footnote: objection handling when your credibility is questioned

Here’s a pr soundbite exchange war captured (31 March 2017) between the new plant constructing council leader, and then the celebrity campaigner;

“Mr Irons has a right to his views, however the council has typically preferred to listen to the advice of independent waste experts, rather than actors.”

“I’m sorry I’m an actor. I’m also a person. I breathe, I live. I know the sort of country we want and it’s not this.”

Do we live in a post-experts age? Have you a ready response for when you are dismissed for either being one or not as good as his?