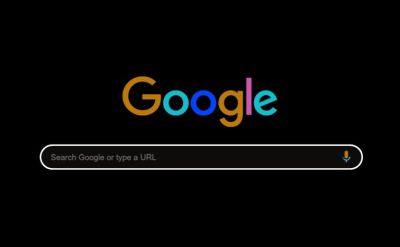 This week saw the curious occurrence of a labour strike at one of our digital behemoths.

The growing backlash against the tech giants, encapsulated by their detractors’ reference to them through the acronym “faangs“, received the accelerant of a worldwide staff walkout at Google.

This fuel may sadly be as short-lived as the strangely tokenistic few minutes employees stood outside their office entrances. Yet the public (user) conscience is surely now aware that the commonplace practice of paying-off alleged bullying or even sex-pest bosses obscene sums such as the widely reported US$90m (NYT piece Oct’18) both exists and ought not be rewarded with our eyeballs.

This made me think of the adverse publicity which swamped feeds. Bad for Google.

The day in question, I took a laptop PrtSc of their desktop homepage.

Then applied a filter. As you can see above. ‘Negative’ was its name. It simply reverses the colours. Swaps each for its “opposite”.

Which struck me as a decent yet under-used slide treatment.

Got anything that you want to show you can switch? A message, image representation, product fortunes, branding even. Then why not remix with just such a ‘negative’ flip for extra audience recall.