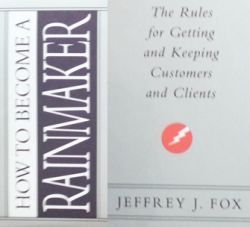 I first read this book, over a decade ago. I spoke with publisher Random House about penning something on Selling. In time honoured fashion I asked them what they wanted. “Like our current author Jeffrey Fox, but funnier”. Their view of what makes a worthy addition to the Sales canon and mine did not align.

I remembered thinking how the book does not do what it says on the cover. Sadly, this will not make you a “rainmaker”. Certainly not of the accepted – and repeated by the author – definition of solo flying big hitter that brings in all the squillions that the entirety of their ‘professional’ colleagues feed off.

It took only a couple of hours to read it again all these years later. Does it stand the test of time? Well, no. It is not a classic of the genre. It is perhaps a hostage to its time. In fact, it feels more stuck at best in the late-80s rather than the dotcom Millennial period of writing. (As a non-American you can’t help but squeal at the insistence of the term to “dollarize” your proposal and the 120-word voicemail message template is a shocker). You could argue that how to eat, dress and display manners are essential basics. Yet they seem to take up a quarter of the book when a handful of lines could suffice and really do age the tone.

As I read, I made notes of the pages that illuminated a great concept. Either something pleasingly new to me or refreshingly updated. A grand total of three page numbers. That probably tells you all you need to know. Yes, it’s harsh to judge something clearly written as an airport book which seeks to brush so broadly around the subject. But for your tenner you expect much better.

I did chuckle at the (quite rightly) lengthy depiction of “show them the money!”. Back then I remember myself using the exact same Jerry Maguire movie vibe to thrust salespeople down the RoI route. Anything which reinforces that is a winner. I’m pretty sure nowadays this technique is entrenched. As is the direction to sell ‘not drills, but holes’. Or as he bizarrely adds, ‘no horseshoes to dairy farmers, nor hospital beds to hotels’;

He intersperses six “killer sales questions”. These give you an idea of the general level;

The three goodies I referred to earlier are an eclectic bunch.

The first is the aforementioned “points of difference”. Or P.O.D. as the author notes it. I’m reminded of when I asked a room full of highly paid New York tech salespeople if anyone knew what a USP was. Not a sole did. His POD is perhaps beyond a usp in that he stresses ‘different’ doesn’t necessarily mean ‘better’.

Then in what is really his only reference to ‘process’, he entitles a chapter “show the chain sell the first link”. I was all over this. It’s perhaps the single best bit. The most effective element I learned in my first year was how to do this. Timeline Selling was our phrase back then, twenty-odd years ago. It was – and remains – a belter. Let the buyer know the entire rungs upfront and follow them from the first step.

Thirdly, he adapts the well-worn golf phrase, “drive for show, putt for dough”, to become “present for show, close for dough”. Urgh! Yet as a golfer once myself, I did smile admiringly at it.

If you’ve a team of golfloons, you’re in as a sales manager with this one. Swap out ‘present’ for ‘pitch’ and it rolls off even better. But to switch the emphasis around is where the real money’s made; ‘close for show, process for dough’. And in that small phrase alone you probably see where I and Mr Fox diverge.

I know it can be problematic judging a person’s entire future output or prospects through the lens of their first work in the arena. I realise how much my own blogging has evolved since my first musings almost a decade ago. Yet I do feel you need to show some sparkle of originality, conviction and general gravitas from the relative outset.

My chief complaint is that the book neither offers anything excitingly new, nor does it present its knowledge in a dynamic manner. I felt it was a going-through-the-motions exercise in the anecdotal journalese of selling from a glue-maker exec with a flashy MBA rather than really bringing out what makes the difference.

I’m so over these supposed soup-to-nuts life experience selling books. Now and back then. Especially frustrating as there a couple of real ideas that if properly and lovingly expanded had the makings of something really rather special.