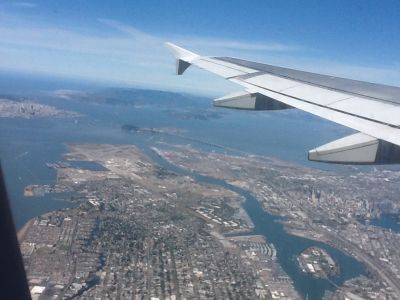 One glorious afternoon in San Francisco, I realised I needed a pair of sunglasses. A lover of shades himself, the chief exec of my client took me to a boutique mall in the ‘burbs.

It was quite an experience. My accent created a stampede of eager assistants. And much salivating greeted the claim of my fellow shopper that only the best would be good enough for me.

So, under the kind of pressure only an American ‘service’ culture can skull-splittingly induce, I tried on a pair. Luckily my shaking hands didn’t drop the delicate frames.

I daredn’t even try and sneak the faintest of glances at the price tag. The temperature was rising through the smiles.

As I replaced the first option and reached for a second, my chirpy lady helper took the first set and placed them on some kind of tray. I thought nothing of this, subconsciously thinking she’d seen my sweat of fear adorn them, and was being polite in her preparations for their requisite cleaning.

Yet when this procedure was repeated a couple more times, without any cloth rubbing in sight, I peaked closer at the tray.

It was wonderfully put together. Black painted wood, with green felt lining and slats on which around half a dozen frames could neatly sit.

My compadre was keen for me to plump for the Persol. Exactly as worn by James Bond in the electric opening to Casino Royale.

I wondered if my trembling, nervous laughter was audible as such.

I planned my exit with the aim of preserving dignity all round in tact.

I made reference to a pair of Ray-Ban’s I’d bought on a previous trip to The States and hoped they’d still do the job.

As the sanctuary of the street was just a step away, I received one final, gentle tug on the arm.

The assistant thrust the tray of glistening frames in my face.

The gist of what she said was that she’d kept hold of the ones that looked good on me as she’d hate it if once left I’d regret not buying my perfect pair. My last chance to buy beckoned.

It was quite incredible.

I was reminded of those dastardly timeshare sellers’ tactics at the infamous group sales events a quarter-century ago. No-one was allowed to leave without ‘bumping into’ a salesperson they’d met at the beginning of the evening as they headed for the door. That seller would then pound them with emotionals. Along the lines of,

‘and I thought it was perfect for you guys’,

‘you struck me as really wanting this’,

Eish. Yet this tactic can be used in an ethical manner.

I think it is acceptable to have this type of ‘tray’ idea, but what must be worked on is the form of words used. Any language creating pressure and all about the vendor is clearly not the way to go.

The first solutions I ever sold included several software modules. The order form evolved to be a complicated document. Yet the reps kept using it because they liked the times when a buyer would, as the pen hovered, tick an unexpected box and add that one precious extra item.

The online giants all use this review-style approach too let’s not forget. As you prepare to click ‘buy’, you’ll see all the items you saw but didn’t select. And no-one seems to consider this lacking in moral fibre.

In solution selling nowadays, a big old plof (price list order form) may be a touch overkill, but with technology as it is, there’s no reason why you can’t tailor each order form to its individual buyer.  The trick is doing so to feel as natural as a modern-day web retailer, and not as inhuman as a timeshare shark of yore.