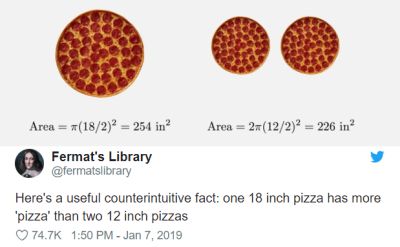 I did for a while wonder about the sheer maths of this. Is there a graph showing where a particular percentage larger of one is equivalent to a pair of smaller pizzas?

Still, in this case, a whole that could be seen as only three-quarters the size of two alternative items is in fact roughly an eighth again bigger.

Oh what potential lessons for our pipeline.

Two twelve inchers just feels a better deal than a single eighteen inch pizza; 18 sounds only half as big as 12 – whereas 12 doubled is 24. Surely bigger…?

But it’s your mind playing tricks.

Is the same sleight of digit at work with your ongoing prospective business?

An opposite affect can also be at play. How many times do you see a seller concentrate on the whale? With the hunt long and arduous, when during such time, way more smaller fish went unchased that could have been landed which would have meant more accumulated commission.

Either way, perhaps a quick sanity check of today’s forecast is required. Along with a confirmation of what the optimum sweet spot, process-central bid actually looks like. I’d like 12pc more without realising it, wouldn’t you…