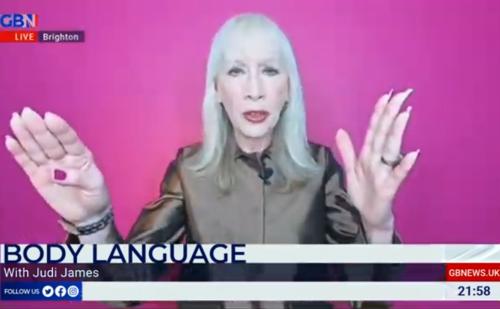 It’s a speech most of the world has seen clips of.

Take this typical reporting. On post-speech reaction. From his usually flag-waving backers at the New York Times; Lawmakers from both parties express fury over the withdrawal from Afghanistan.

Furthermore, here’s a random selection of words used from normally steadfastly supporting media gonfaloniers; surrender, shameful, botched, lacking humility, deeply flawed, finger pointing, and epic mistake. When even your friends are saying that kind of thing, you should know you’re in trouble.

If that’s the unusually agreed context, and text, then what of the delivery?

That’s if we accept English body language expert Judi James. Seemingly in longstanding demand for dating reality tv show analysis. I caught her two-minute take on rolling news. And devastating it most certainly was.

I was struck that you didn’t actually need to have seen or heard the speech to recognise the non-verbal errors she runs down.

Weak Gestures
His gesticulations were very weak. Even his precision gesture, his thumb clamp, was weak. His hand gestures lacked conviction, lacked decisiveness, and he didn’t seem to have control over them.

Afterthought Gestures
When stating, ‘I stand squarely behind my decision’, his two raised firsts came halfway through those words. When we are congruent – when we really mean what we are saying – our gestures tend to come before the words. When they come as little add-ons, like here, it almost looks as though the gestures have been written into the autocue.

Misplaced Gestures
His only emphatic display, with his pair of up-pointing index fingers, followed with one raised single digit index finger, effectively portraying, ‘I’m sure what I’m saying now’, was reserved for talking about his predecessor, Donald Trump. So the real meat of his speech, the only bit where he did look emphatic, was just about blaming someone else. Not where it should’ve been, which was relating to how Biden was going to fix his Afghan calamity. 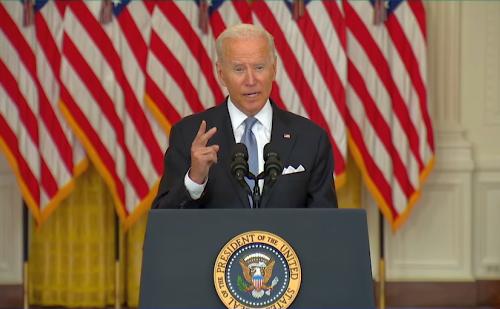 Regardless of the global geo-politics, this trio fascinates the business presenter and sales pitcher in me.

Media training I’ve experienced tends to insist you become a robot. I disagree wholeheartedly with this approach. Yes, I get it. I know why they teach what they do. I firmly believe there is another way.

You not only can but I feel should use gestures. Get across who you are through them. Hammer home what’s important by them. Gain rapport with a human touch from them.

On video calls this gets highlighted.

If you are presenting a deck or pitching an angle of your proposal, then in the video meeting should not be the first time you’ve attempted such.

Rehearsal is a sadly all too often neglected essential of the Sales world. Winners are not those who wing it. Despite folklore and hero stories.

I have IRL as well as now over video helped presenters understand and deploy a gesture of emphasis. One which is used sparingly. One which gets across the special nature of that specific point which it accompanies. One that gets appreciated by the audience.

It is possible to avoid jazz hands and still reinforce a big point.

Whilst the expert above draws out more typical gestures rather than my bespoke ones cited, the fact remains that for a specific, repeated point, as well as for a specially delivered important message, you have a chance over live video to stand out with a judiciously prepared hand gesture. Do you know what it is that’ll make a difference for you on your next presentation?