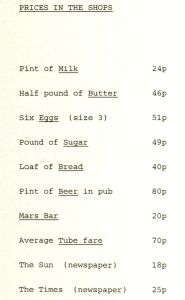 Thirty years on and the foundation of a former British Prime Minister releases a trove of personal papers. Among them, advice on the pop music trends of the day, alongside a copy of the typed out cribsheet of an ordinary, everyday basket of goods as bought by the common voter.

I recently paid seven-times the amount then given for a pint in a London watering hole.

Although interestingly, an in-store baked “tiger” loaf this week was now only double.

Still, the game is still played. With interviewers desperate to catch out the candidate with an item their advisers have neglected to advise upon. As seen by the more modern-day spreadsheet which David Cameron had to commit to memory.

This practise so necessary that the glorious satire that was The Thick Of It showed us how New Labour ministers needed their weekly Zeitgeist Tape.

Yet we ignore this type of intel on-call at our peril.

Whilst it is good to ask questions of a prospect, there are some – many – things about their world we ought have down off-pat.

How well do you know their universe?

Even worse, I have in my time done a little light ‘test’ for salesteams I’ve been asked to improve.

After a formal conference, one lasting more than a day and usually offsite at a lavish venue, my next session with them has begun with a gentle game asking for answers on details (which I consider vital to better performance as opposed to mere random triv) all presented at the sessions just gone.

The scores tend to be shamefully low.

Please do not let yourself reside in such a bottomest quartile.