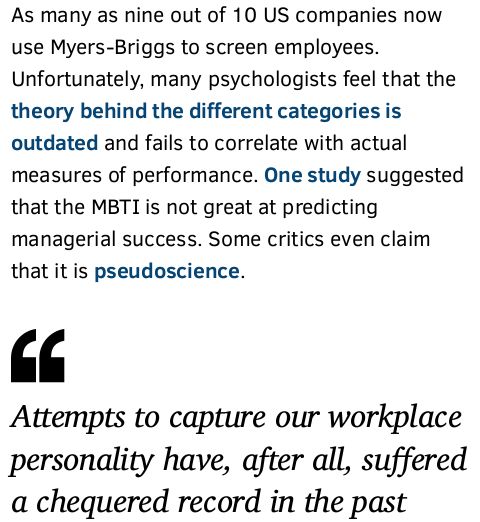 Banging on a firmly open door. I was delighted to feed on this morsel of sense this week.

Myers-Briggs and their Type Indicator. Really.

Every such test I’ve taken has been so shockingly misleading as to be slanderous.

So it looks like someone has tried to better the untrustworthy psychometrics which have smothered the recruiting globe in its choking fog.

Although the clear question remains, how come this stab is now the ‘right’ recruitment blade..?

Researchers at the “University College London have now identified six traits that are consistently linked to workplace success, which they have now combined into the High Potential Trait Inventory (HPTI).” MBTI becomes HPTI. See what they’ve done there, hey..? (a sales lesson in that alone, perhaps…)

So let’s cut straight to it. If (a fairly large-looming ‘if’ naturally) these tickle your interview assessment fancies, then what chance we can mould questions around these six to uncover the general desirable qualities of our potential new selling hire?

Totally untested in the field, here are my initial thoughts on a quick question for each trait:

Conscientiousness – What do you do about a new sales initiative that seems slow going?
Adjustment – What have you done recently on a deal that experienced hiccups?
Ambiguity acceptance – What happened on your last sale with a loosely defined prospect spec?
Curiosity – What business skill or idea have you chosen to pursue lately?
Risk approach (or courage) – What has been the trickiest sales situation you’ve needed to face up to?
Competitiveness – When have you had to go the extra mile (why, and how did it go)?

I’m sure with a bit of focus you can craft even more snug such questions for your own role interviewing.

One worrying tip mind you, is that these half-dozen, when found in overflowing depth, can actually impede, rather than enable work success. Regardless, there may well remain something in this to add power to your hiring efforts.