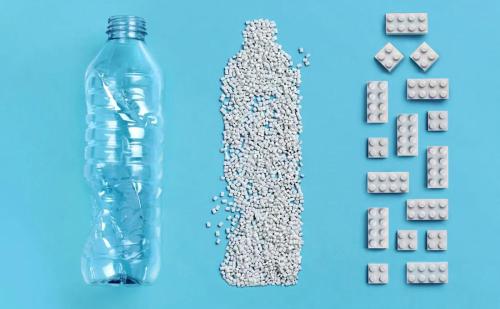 Although these toy building bricks are only prototypes for now. Solutions apparently proved elusive during the Lego maker’s three years of testing. A key stumbling block (ahem) being the measure of ‘clutch power’, allowing lugs to fit durably into their abutting adjacents.

For many, this attempt to move from oil produced plastic will not be enough. As welcome as recycled plastic sources may be, alternative materials that are not hydrocarbon based considered the only true ‘green’ answer.

Still, the visual is striking though.

Perhaps making the task look easier than it actually was. And with undoubted subtracting or adding phases left out. Pleasingly set out in the familiar bottle silhouette.

Might be taking a little touch of poetic licence, mind you. As the accompanying press (note too company PR) suggests each bottle can produce ten standard-size bricks. And that’s from a one litre bottle, rather than the more instantly envisaged 500ml the above appears to be. Not forgetting they could still be two years away from being able to buy.

This is a take on the before/after treatment of which I’m a big fan.

Here, being a before-during-after illustration.

Any imagery that lets your prospect visualise with an ‘a-ha…’ the difference between where they are now and where they can be with your magic liberally applied is a winner.

Can their ‘before’ also be shown as component parts then re-assembled for a glorious ‘after’?

This example shows you can add that mid-, breakdown or transition stage for impact too.