oh, yes, another one!

2015, 2017 and now 2019 offers up another chance to gauge how UK political manifesto presentation might aid our selling collateral.

This time ’round, I was less interested in the actual glossy magazine shoot that has become the stated programme for any incoming administration than in each party’s landing pages that held the downloadable doc. 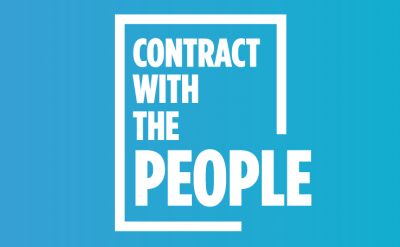 Of the five parties fielding most candidates nationwide only one eschewed having a holding page approach. The Brexit Party instead opted for a direct link from their homepage straight to their slidedeck. They also chose not to name it as their manifesto.

Another message perhaps supporting their urge to ‘change politics for good’. Although their alt-term, Contract, feels inferior to the time-honoured Manifesto.

This is relevant though to whether you might switch your typical Prop cover or slide title pages. Does it say simply ‘Sales Proposal’? If so, there are better ways to kick off your pitch.

The party of the incumbent Prime Minister went a small step towards relabelling too. The Conservatives chose to double-stamp their manifesto links page with the joint-header Our Plan. Followed by a kind of Exec Summary

This they dubbed the Leader’s Guarantee. Six iron-clad promises, with an extra cunningly placed scary negative at the end. Echoes of the election winning machine of the Centre-Left for thirteen years up to 2010 and their infamous five-point pledge card. 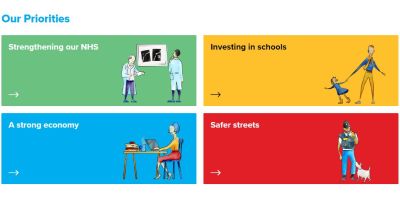 Then after eight snaps of their Great Leader (and perhaps superfluous or reinforcing further text, depending on your point of view), there’s further links to a quartet of Our Priorities.

The Greens continue to miss their gaping opportunity and stick to being a quasi hard-Left protest movement. There is though something interesting about their page. Here’s half; 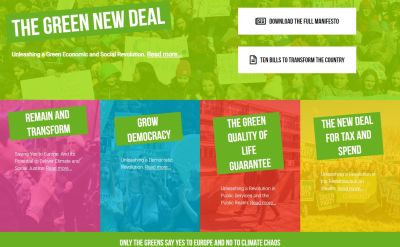 It reminds me of an eminently serviceable deck recap slide.

The small and once Centrist Liberal Democrats have also moved not just Left but then Left again. 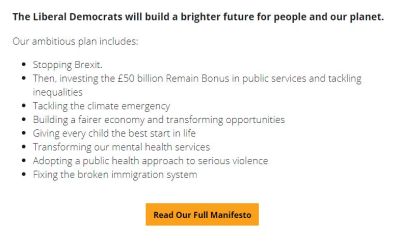 Their first posted manifesto page managed to be both the least design-literate and most message inept. “Stop Brexit” followed by the kind of cliched non-specific policy language bullets that every single party trots out all the time. Their second updated effort fared slightly better with design, yet remained using the same messages that ultimately got hammered at the ballot box. 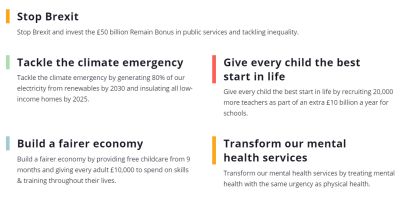 Then we have the Labours. Result counts showed them out-fought, out-witted. Their page let’s us glimpse how. It’s Time For Real Change hopelessly out-gunned in critical cut-through. 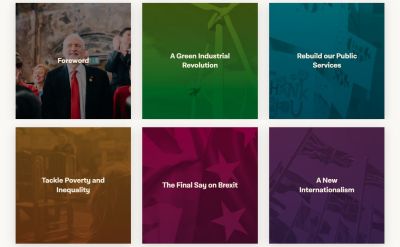 Dismissed in their party civil war post-mortem by the many as ‘Marxist’, by the few as ‘won the arguments’ this joins the terrible page club.

Yet I feel compelled to say that the best manifesto page was none of the above. The eventual Centre-Right victor profited from the best campaign sloganising. Get Brexit Done with its sub-slogan built on the clear success of the referendum campaign’s Take Back Control, which in this poll also showed subtle growth; take back control of our borders, our laws and our money, and protect our economy, our security, and our United Kingdom.

Yet this piece of electioneering benefited from an overwhelming number of smaller punches. Not least their negative-campaigning masterstroke of putting up their own page, their own summarising of their main opponent’s manifesto. Hijack marketing combined with outright attacks on competitors is a risky game for us solution sellers, but it worked here with aplomb. 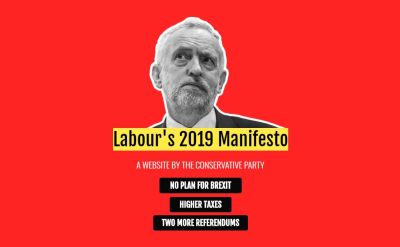 Hands down the best slidecraft of the 2019 UK General Election.