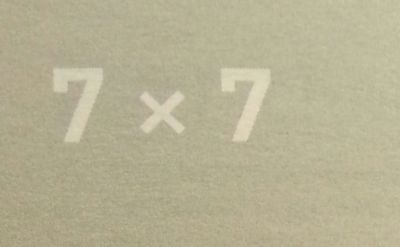 An independent English bookstore chain went big this month in their business section on the kind of quick fix nonsense I loathe.

A series of “[insert enticing discipline] in a week” guides were sadly prominent. I frown to report these included a pamphlet – for that’s all they are – on selling. Not a great use of anyone’s eight quid (or ten dollars).

As I flicked through in despair, I noted each followed a similar rubric. Your week broken down by each day, and at the back, seven septuplets of ‘snappy’ wisdom bullets. 7 x 7, as pictured above.

I did at least spot a crossover with solution selling from the criminally entitled mba in a week.

Keen to suggest an mba should strive to pursue, make and embed change, here are their chosen seven quotes. Despite not quite being the ‘greatest’ from the genre (there are legions of such around the web from which to also draw but at least they have the godfather of them all, from Machiavelli), could any inspire a slide or room currently hesitant with you?

Business is like a man rowing a boat upstream. He has no choice; he must go ahead or he will go back. – Lewis E Pierson

Only the wisest and stupidest of men never change – Confucius

There is nothing more difficult to take in hand, more perilous to conduct, or more uncertain in its success, than to take the lead in the introduction of a new order of things. – Machiavelli

The rate of change is not going to slow down anytime soon. If anything, competition in most industries will probably speed up even more in the next few decades. – John P Kotter

Everybody has accepted by now that change is unavoidable. But that still implies that change is like death and taxes – it should be postponed as long as possible and no change would be vastly preferable. But in a period of upheaval, such as the one we are living in, change is the norm. – Peter Drucker

It’s not the progress I don’t mind, it’s the change I don’t like – Mark Twain

footnote one: I did note with glee one juicy tidbit. How about this! Essential mba knowledge; the bean counter; 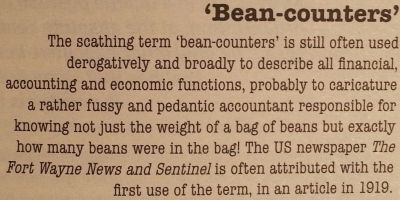 Do note though, that is definition is incomplete. It neglects the bias towards knowing the cost of everything, yet value of nothing as well as the absence of commercial nous. Also beware, on occasion, you can find a worthy bean counter. And the more beans they count, the happier they get.

footnote two: I also liked to see design similar to the Harvard 8×8 signifier (about eight talks of groundbreaking education sector thinking for just eight minutes each), pronounced 8 for 8: