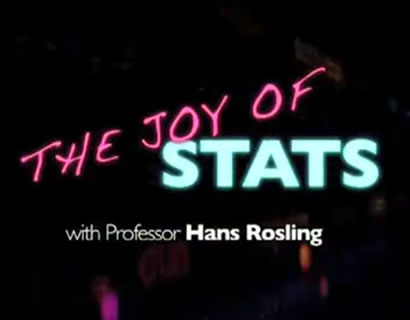 Catching Hans Rosling‘s delightfully enthusiastic The Joy Of Stats reminds me that it’s time to brush up on a simple bit of maths.

I appreciate his distraction that the average number of legs for any country’s population is 1.999;

Some people unfortunately have one leg, some have none. But no-one has three. So nearly everyone has above the average number of legs.

I guess most of us know that there’s no such thing as “average”.

The common understanding taken from this description tends to be the arithmetic mean.

Preparing to sell anew or rejuvenating a product often involves trawling through reams of sales figures.

Yet I’ve found that these stats usually mislead.

The problem comes when you encounter data sets that are either uneven (skewed or lumpy) or with significant outliers (residual values).

Let’s work through a typical example.

You’ve ten reps in a team. They’ve been selling a new product for a while. Combined sales are £110k.

Yet one of the reps sold a huge chunk, all by themselves. Of £100k.

In this case, let’s say the others received orders for just £1,000 each.

The mean might be eleven thousand, but the median is just a grand. So is the modal class (and mode).

These results are likely more useful than the mean.

The median is the middle value. If you put all the results in numerical order, it’s simply the one slap bang in the middle (or the mean of the two central ones if you’ve got an even number of figures).

The mode is the value that appears most times (modal class is a set of values that appear most).

In some cases, these calcs can be much more eye-opening.

Next time you sift through a list of numbers, basic spreadsheet sorting will let you find these and comparison with the mean may well just let you shine in an area otherwise dark.