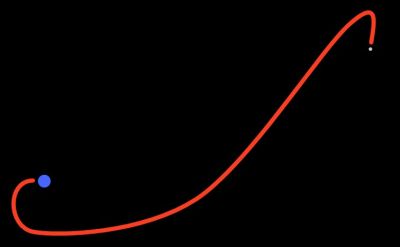 From Earth to the Moon; distance to scale, with rough approximation of smoothed travel path in Nasa brand colour of Orioles Orange (with this label in their other, namely Midnight Blue).

This week India become the latest country to find their moonshot fall short.

Their Vikram moon lander aimed for the first ever lunar South Pole visit. Would there really be water residue in the shadows of craters down there?

Just a couple of kilometres above ground, all comms were lost. Pictures since beamed back from its Chandrayaan-2 mothership found the spacecraft. A hard crash landing.

Yet despite failure, the nation remained staunchly “still proud”.

So many a moonshot misses.

Indeed, I recall in 2015 touching on such with Google’s alpha-bet restructure (they even have a place nicknamed the ‘moonshot factory’). Whilst in general parlance, a moonshot can refer to any effort which represents a wholly never-before-done undertaking, there is a more specific meaning.

Here’s one (of several) such definitions from around the web;

Instead of a mere 10% gain, a moonshot aims for a 10x improvement over what currently exists. The combination of a huge problem, a radical solution to that problem, and the breakthrough technology that just might make that solution possible, is the essence of a moonshot.

There’s two main selling elements to a moonshot I feel.

How can you improve something – prospect pool, referral volume, cycle times, close rates, margin earned – not simply by the odd percentage point, but by a multiple?

And what is the brand new thinking that comes together to make such step-change travel so far?

It’s what happens along the way that can be so powerful. Almost regardless of destination, what gets picked up and made real getting there can give you huge impetus. Whether or not you actually arrive at the initial intended place.

We live in an epoch where too many focus on the instant of the #fail. Yet the true winners surely think more on the endeavour.

Perhaps a classic process-outcomes error. A misjudgement akin to a worklife transposition of the classic verbal spoonerism.

As well as water, the Indians hoped to find potentially powerful energy sources of Helium-3, spread wide a massive boost to the country’s technological understanding and related global partnerships, and show the way for a paradigm shift in thinking not least with problem solving at home. Achievements not reliant on the soft-landing event in isolation.

Admittedly, there’s not an awful lot of our solution selling domain that can ever be recipient of a tenfold jump. But there’s plenty that can revel in more than a mere small proportion of shuffle ahead. As well as the weekly one-percenters, what are the targets you could have for reaching the larger shimmering orbs in your night sky?