The warm glow of accomplishment. In a little under five years I’ve blogged 1,000 times. One thousand posts. All from my experiences in the real world of sales and nuggets picked up through life in general. With the allied aim of showing how salespeople should be running the show and to help any seller that wants to one day assume such mantle. Sales CEOs are a must, aren’t they?

As I’ve blogged before, I don’t aim to necessarily proactively advertise myself, it’s more that I do like to let people thinking of doing business with me to have a way of knowing how I think. Thankfully many kindred souls have gone on to provide highly pleasurable opportunities.

Without any ‘search engine optimisation’ or the kind of online activity that most pundits advocate, I’ve still managed to garner 45 comments. So thanks to all who’ve got in touch and joined in conversation.

Without becoming a multi-site-blogobore, I’ve also got myself on a couple of lists of ‘web’s best sales blogs‘, which is nice. Although you probably get where I’m coming from when I say that of the 350 featured in that link, I am one of only 14 that isn’t tweeting away feverishly. Some of us it seems, have a day job.

Having a large interest in the progression of sales skills, I was always aghast in my hardcore sales knowledge management days at how many reps not merely slack in pursuing their own self-improvement, but blatantly didn’t give a monkeys about working on getting better.

This classical two-by-two sums up my findings. 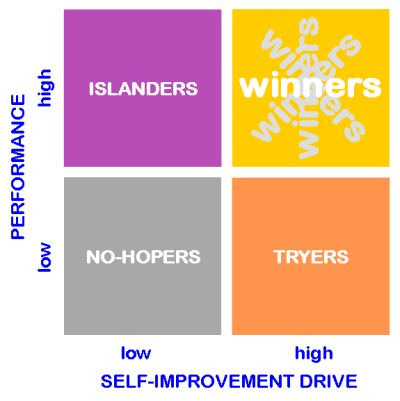 It’s an interesting dynamic by which to gauge both yourself or members of your team.

Winners. They stand out, obviously. But beware that not all who command lofty positions on the sales charts are true ‘winners’. At least half of 100%ers will be Islanders. They are often mavericks, but not in a good way. They are silos of intelligence. They rarely pass on anything of value, preferring to keep their tactics close to their chest rather than share best-practice. All the while that Winners are mentoring, testing ideas, generating healthy debate and being all-round team players, Islanders suck all they can out of the organisation for their own ends whilst claiming their results justify the means. And senior management falls for it.

When people lament with hindsight that they wrongly promoted their best selling person to become Sales Manager I’d bet that they plumped for an Islander over a Winner. And you can see why. Islanders are canny. They play the political game. They’re often slightly aloof. By coincidence they display the kind of distance many people fool themselves that sales management needs.

Tryers are not yet stellar performers, yet with appropriate nurturing they could well be. They need to be invested in. It’s so sad that I’ve seen highly paid, powerful leaders of sales teams stand up in meetings and berate salespeople for taking time out to learn. Tomorrow’s superstars need to be developed all the time.

Then there are the No-Hopers. They are in the departure lounge. It’ll probably be a mercy killing when you finally show them the door. If only you’d done it sooner, but hey, they were such a nice person.

The sales stats don’t lie. You can pinpoint performance with the easiest of spreadsheets. But how do you nail the intent to push oneself on?

Have you ever asked a salesperson what skill or tactic they’re working on improving for themselves right now?

A couple of years ago, I ran the kind of training day I’ve done scores of times over the past decade. It happened to be a broad introduction to Solution Selling. The dozen-strong sales team were of varying experience, and charged with roughly £40m between them. They sold high-value, complex kit with plenty of competition into bewildering environments.

A piece of best-practice I’d learned over time is to call up all trainees beforehand. By way of thanks, I sent an email. It confirmed what we’d discussed (in confidence) and included an invite to check me out on this very blog. How many do you think clicked through?

The answer tells you all you need to know about why so much in sales fails.