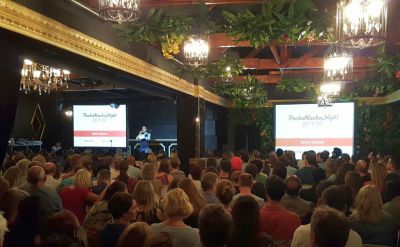 Pecha Kucha Cape Town 47. I’ve wanted to attend one of these nights for a long while.

As the compère (more of him later) informed us – with an origin story slightly different to the wikipedia entry – the presentation rubric was created at a firm of architects in Japan (by an Anglo-Italian duo), annoyed with sitting through tedious slidedecks.

They decreed a new speaker’s format; 20 x 20. Twenty slides up for twenty seconds each.

Six minutes forty seconds to get your point across and that’s that.

Speeding around the world from 2004, there’s now regular PechaKucha nights in over 1,000 cities.

My first followed the template for nine slots.

So what could be learned for the selling presenter?

I feel compelled to begin with the two standouts.

Both the youngest (by some distance), at 23 and 20. I felt old. Both women. Both with a hugely engaging and emotive cause;

Bet Chaeli Can’t & What Would You Tell Yourself At 18?

Second-up, Chaeli Mycroft, an “ability activist”, a world champion dancer, athlete and go getter. Oh, and completing her Masters. Wheelchair-bound through cerebral palsy. I’m sobbing again as I blog here in total admiration for her fortitude and more.

Her stall; “Bet Me I Can’t”. All her life, told she cannot do stuff. So she went out and did it. Her next aim? To ride what looks like a wild horse for five days straight. “Back me, or back against me.” Proceeds help her help others in her situation similarly achieve.

After the Beer Break, we meet Sophie Joans. Age 18 she decided to elicit advice on life. She walked up to strangers and asked them what they’d go back and tell themselves at her age. The results certainly make you stop and think. Especially as she (rightly) appears to disregard the ‘number one’ response, the hollow “follow your dreams”. Even better were the cards she styled out of answers which help others at just such a lifetime crossroad.

It is surely no coincidence that these pair also had the best set of twenty slides.

That is not to say that others didn’t show the odd belter or two. But theirs were consistently top notch.

Chaeli’s were almost all photos. Mainly of her ‘doing’ (all those things she’d been told she couldn’t). Like climbing Kilimanjaro on her 21st. The only one with words, was one simple word, repeated over and over cramming the screen; can’t.

Sophie’s were mainly of her actual card comments. In actual handwriting. Always placed in a cool setting. One big laugh went to a pair juxtaposed; “listen to your mother”, “don’t listen to your mother”. Interspersed with photos of contributors. No real obvious piece of powerpointing in sight.

They told a great story. Hooks all working beautifully. Slides all relevant. There seemed no lazy info-dumping. Each deck angled to hit your personal viewpoint.

If only the others would heed in such way. True, a couple were closer to a simple holiday pics run-through. Both the Table Mountain Cableway repairman and Himalayan cyclist entertained in this manner. But even these could have framed their talk from the off far more engagingly. (As could the hardest first spot, promoting Garden Route nature walkways.)

Given that at least three had done the gig before or were “professional” speakers (that latter I flatly cannot believe) a big culprit was Mister South Africa 2017. He had such an opportunity to inspire the crowd with how any one of us could be a Beauty Queen (or King). Yet it was sadly all-about-him. Yes, so at 172cm (just under 5 foot 8) and without a six-pack he shouldn’t have won. But the audience doesn’t want to hear how wonderful you think you are. They need to be inspired they can similarly achieve.

If only he’d began … “Who here thinks they could be in a beauty pageant?”

I also learned that 90s-type clipart slides are still around. As well as the penchant for mumbling. And how a promising title can deteriorate into life-sucking drivel full of meaningless jargon and dryness; “The 3Cs of future proofing your career”. Also full of just the imagery I loathe – all ‘funky’ shots of lightbulbs and clockwork and decade-old stock photography.

Back to the compère. I appreciate he’s a volunteer. And so duly given plenty of slack. But…

I understand he’s Canadian. Fond of anti-Trump jokes. The first got a bit of a giggle. The rest, nothing. Silence. And rightly so. This was a blight on proceedings. As was his call for each one of the audience to “try talk to a stranger”. Perhaps his worst offence was to constantly suggest that the world was going to pot. For a self-styled “communications consultant”, an embarrassment. I’m hoping that for him, this was a blip.

He did though, unwittingly set up perhaps the best laugh of the night.