In case you hadn’t heard, there’s a British referendum in a month’s time.

Attack campaigning mars both positions so much we’re in need of a new superlative beyond ‘negative’.

This week saw the most subterranean low so far.

Bremainians got The Treasury to forecast what would happen after Brexit.

Unemployment rockets, growth plummets, house prices drop off a cliff, food prices climb out of reach, and Christmas is cancelled.

According to the PM standing alongside his Chancellor sidekick (aka Mystic Gideon), punning during his speech at the world’s largest home improvement retailer, it would be the world’s first DIY recession. He clearly is not a student of how all the others have come about. We would, he claimed, press the economic self destruct button.

Two scenarios shot forth. One named Shock. The other, Severe Shock.

Not much room for doubt there.

The Leave side opprobrium was duly carpeting.

They wailed at the report’s “deeply biased propaganda”. Derided it as “ludicrously apocalyptic”, “shabby and misleading”. Noted its barbs were “because they’ve nothing positive to say about the EU”. Mocked previous Treasury predictions, most notably that we’d end up back in the Stone Age if we left the ERM in 1993, yet our departure heralded a fifteen-year golden age.

Those commentators trying to maintain a balance, mentioned this tactic revealed a difference in mindset.

Were voters becoming “doom immune” or “apocalypse agnostic” as the “scaremongering” stay side “overplay their hand”? 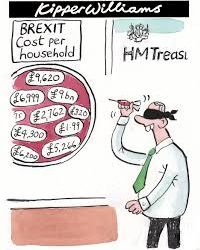 Project Fear seems fixated on the personal monetary loss from leaving. Despite their claim that the typical family would be £4300 worse off being roundly dismissed, “it’s the economy, stupid” as a driving force still reigns.

The selling implication of this latest intervention is intriguing for anyone battling emotion against a firm financial case.

In Props, you simply must deploy a page on Return. I wonder, in the light of this, whether there oughtn’t be another page that considers opportunity cost. Numbers that show the status quo is a road to not only nowhere, but way less success too. Drafting in conjunction with your champions, could you even headline it Shock Or Severe Shock?

At the very least, when assessing status quo risk clientside yourselves as a selling unit, the thoughts of Shock and Severe Shock should be uppermost in your mind. After all, who voluntarily makes a shock to their system?