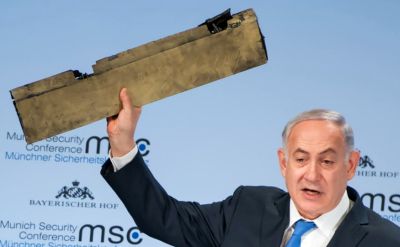 The colourful Israeli leader is at it again. Back in 2012 he showed the UN Assembly his Bibi Bomb cartoon graphic. Now he repeats his tactic of using a presentation prop at this year’s Munich Security Conference.

As seen above, he brandishes what he says is debris from an Iranian drone. One that apparently violated his country’s airspace.

He is not the first world statesman to deploy this tactic.

We fondly remember Ukraine’s ‘Petro’ in 2015. First with wreckage then captured Russians’ passports.

Yet consider its impact.

No other speaker at this event garnered coverage.

The image above sat atop newsfeeds across the globe.

His message, his spin, his stance was the sole noise that sounded from the meeting.

Props work. Cartoonish or otherwise, when there’s a true and relevant meaning, a similar one could help you own the debate on that bid.