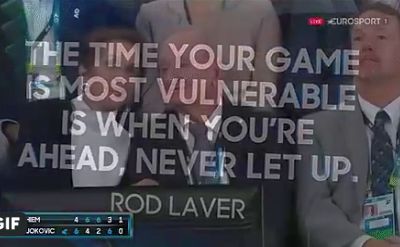 As the deciding set got underway at the recent Men’s Aussie Open tennis Final, a moment from the tv coverage was caught by a broadcaster’s tweeted gif. Screenshot above as a full screen quote faded to show the legend of the game in the crowd who said it, Rod Laver;

“The time your game is most vulnerable is when you’re ahead, never let up.”

It’s one of the many variations on the anti-complacency theme. The true satanic success killer. No matter how hard it is to get to the top, it’s even harder to stay there.

I’m reminded among many, of the Premier League trophy machine that was coach Alex Ferguson. He never tired of explaining to new Manchester United signings, ‘what got you here won’t keep you here’.

So, remembering that ‘hard work’ can also be a talent, let’s take a moment to step back;

Is your bid most vulnerable when you’ve been told it’s yours?

Is your process relaxed because so many calls seem to have gone well?

Is your funnel on the verge of drying up just as you smash your quota?

Is your winning approach reluctant to try something a little evolved or even new on a deal?

Is a winning streak under threat from a woken up incumbent or market share player?

Rod Laver has been in this position once or twice! 😉