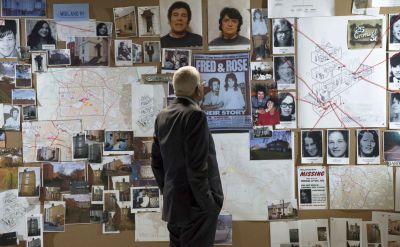 Media interest in England today surrounds the pulling of a scheduled documentary.

Longtime newsreader, ‘national treasure’ even perhaps, Trevor MacDonald was due to deliver a “fresh perspective” on horrific rapes and murders of children by notorious couple, Fred and Rose West. He hanged himself in his cell before the 1995 trial, she remains behind bars for a whole life term.

Their home where so many atrocities and burials took place was knocked down to become a parkland walkway between suburban Gloucester streets.

But the mainstream broadcaster informs us that “due to legal reasons”, tonight the nation cannot now watch the show.

Speculation ponders whether this is because of new suggestions, and possibly surrounding the wife’s role.

Whatever, the pic above is the still released of the suspended programme.

It has Sir Trevor scanning his ‘case wall’. You may know of my keenness for such in the sales office setting.

My most recent blog on which came after enjoying the blended documentary-drama movie, American Animals.

A staple of crime procedurals on screen, here we see a journalistic spin.

On our office space wall real estate, we should definitely be pinning up similar.

For our process, big bids, what we must achieve and how we’ll get there.

What new angles on crimes are you searching for?