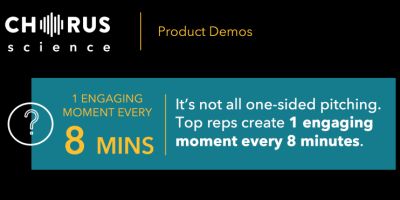 you gotta be kiddin’…

That was my immediate thought when seeing this slide.

8 minutes? How about 8 seconds!

If you go 7m59s without any “engaging moment”, your demo audience will likely have zoned out. Lucky even, that they’re still in your presence.

I think a dose of attention shrinkflation ought be taken into consideration. Just as soundbites used by news media have hugely reduced in time lately (bullet 13 here), prospect willingness to listen to a monologue has also been scrunched to almost zero.

I was reminded of the recent media fawning over the Netflix Black Mirror episode Bandersnatch. 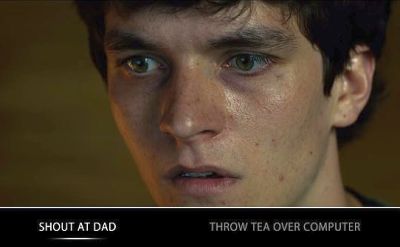 Viewers get to choose between two events happening. From choosing which cereal for breakfast, accepting or declining a job offer, even boarding a (significant) train with his mother or not, the countless options all led to one of five endings. You’ve ten seconds … tick … tock …

This leads to a profusion of different versions of the film, with one of five different endings (or is it ten, or even twelve?). However, each ending will have contained an almost infinite number of woven together story experiences, creating an untold number of variants.

Is this like how your demo could run? How many possible endings do yours permit?

Yes, there’s plenty of debunking of the 8-second attention spam myth online. Yet you probably agree that the time someone (a possible buyer) will sit intently listening to your monologue, no matter how beautifully crafted, feels a lot less now than, say, at the pre-social media, pre-smartphone start of the century.

In similar vein to the military wisdom that no plan survives contact with the enemy, there can be little doubt that no demo script survives your initial skirmish with an audience. And just as it is for those in the theatre of war, plans may well be useless, yet planning is essential. For it is those that once struck by the unexpected, know how to adapt, and quickly, who win.

The best (software) demos are the ones where you hardly show a screen, let alone click a few buttons.

What’s the ideal screen to leave on display at your ‘best’ ending?

Can you work backwards to how you land there, regardless?

When I shaped product demos in the past, there were several, deliberate points at which I made sure answering a question was forced upon the prospect. They then ‘dictated’ the next section. And these must occur way, way more rapidly than eight minutes apart.

Have you got yours all set out? Can you bandersnatch ‘n grab an engaging demo that’ll win?