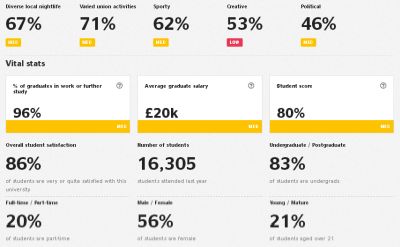 English A-Level results day. What a day. The local media full of screaming teens just before they head down the pub and leave home bye-bye.

“Clearing” is the well-worn process whereby those wanting to go on to uni but under-achieve, halting initial ambition, get to try again elsewhere.

Nowadays joined by “adjustment”, where those that exceed expectations can happily switch course in a kind of upgrade. The scramble begins.

I caught a lady from the University of Hull easing nerves and worries of those thrown into this storm.

The interviewer implored her to “give me the sell” for Hull.

After an initial wobble (perhaps surprised by the question, a malady which we should never suffer, as I also noted again just two days prior this), she began;

“it’s a magnificent university, a campus uni, 96.1% of graduates are in work or study 6 months after leaving…”

At that point, as is sadly the way, the interviewer interrupted, impatient to hear about the city itself. Leading to an exchange on its year as national City of Culture and birthplace of poet and novelist Philip Larkin.

You can hear a proper answer flowering from these various seeds.

If you’re keen to get the best chance of getting a job afterwards, then nearly everyone is in work or further study within six months of graduating.

If you also want to make sure you’ll have the best social time possible, then there’s all that goes with having a vibrant artscape on your campus doorstep.

But surely, each uni could say pretty much the same, right?

Then you look at independent assessment. Above is a composite of often flawed “Which?” stats. There’s also a trio of rankings where Hull comes in the second quartile across the land.

This makes me wonder that once you skim over the perennial top handful, are the rump of higher education establishments now mere commodities?

Differentiation cannot be made on price – as everyone charges the same tuition fees amount. Nor on course calibre – most think one BA is equivalent to another. Nor can it be done on facilities – could you name one that does not have a decent library, student union building, accommodation choice, midweek cheap drink disco heaven?

How do you make a compelling case for your particular one of virtually identical offerings?

We sometimes trip down this crevasse.

Hull appear to have a strapline; Find Your Light. What can join with this as a connected pitch?

Rather than factual numbers, what about trends? Progress, plans or pinnacles?

Sometimes when we pitch in a crowded market, we make the mistake of treating our ‘features’ like a game of top trumps. They score 8 but we score 9. So why not change it up. Help the prospect think a little. Can you come up with a different set of criteria to judge you, where you will uniquely shine?