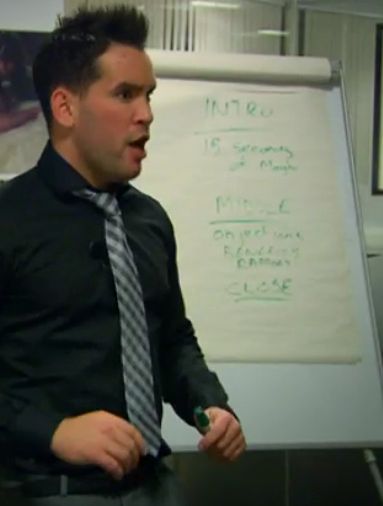 Swansea’s third-largest call centre and its irrepressible boss has provided the year’s fly-on-the-wall telly hit. Even if The Daily Mail uncover scorn.

The pic above is of shift manager Dwayne. He possibly revels in the nickname Twinkly. After leaving his South African homeland to try and make it as a professional cricketer, he seems to have stayed in Wales and joined The Call Centre around its birth four years prior.

As the voiceover paints, 31-year old “Dwayne is determined to infect his team with his enthusiasm and success and he’s running a sales masterclass”.

He prepares in a scene reminiscent of Gareth Cheeseman (around 23’30” in during episode 4, The Cash Cow Of The Company Has Stopped Giving Milk, if you can do iplayer). He delivers his 16-second opening pitch to his mirror:

I’m the Grant Advisor for the local area.

A quick call with regards to your property there

It’s still showing that you haven’t used your grant yet for loft and wall cavity insulation.

I’m just finding out why that is.

The youngest of his six students (only 17) delivers something similar, save for swapping in these different end pair of lines;

I’m phoning about the grant your entitled to.

Are you still living at that address?

Cue horrified look from tutor. When asked by “star manager” Dwayne if he’d buy from himself, he sheepishly answered ‘no’. Later in the programme we learned his tenure was over.

As the barely legible scrawl on the flipchart behind Dwayne shows, this opening pitch fits into his advice that the Opening should not exceed 15 seconds. Then you enter a Middle. Including objections, (a word I can’t really make out) and rapport. Before the Close.

So. This script appears to have been tried and tested by Dwayne. But let’s face it. It’s as Eighties as his black shirt and grey tie combo. Whilst I’m generally fond of the era, when it comes to selling, we must leave it behind.

The ‘problem’ tackled is not yet spending your grant. But what ‘grant’? Consumer watchdogs have long railed against the sales tactic which they see as little more than a bullying  ‘buy plenty, then get a discount’ style offer.

I’d love to do some testing. Different problems abound. The main one must be to reduce energy bills. Keeping warmer for less cash next winter.

I’d use the so-called ‘grant’ as a close. Not as an opener. Never shoot your best bullet upfront.

Fans of this show, note I’ve written other blogs on Nev’s Call Centre selling insights – focusing on shift manager Dwayne’s visualisation, a touch of brotherly coaching love, and the winner of voice of the year.