Nothing like personal experience of your own products ….got this overnight. Feeling well. Many hours of Zoom ahead. pic.twitter.com/Ims9W9gbQh

First up, the tweet above from the widely derided head of an effort near-universally seen as dysfunctional. Dido Harding “runs” England’s test and trace “system”. It is a shambles. Described by the FT this week as “a highly criticised monitoring tool”. One shamelessly throwing £6.1bn down the pan. And counting.

Here, the shock that the app is actually “working”. Possibly. As someone she had contact with five days prior subsequently tested positive with transmission.

The design input for this UX possibly the most expensive ever bought.

So is it worth adapting for a sales slide?

I’m not too sure. Despite the ease of replication or remix.

No matter how many days you have to save the planet, make your deadline or until the window shuts.

Although its headline is indeed a grabber.

Still, as countdown imagery goes, at least you’ll have an anecdote to attach with it. 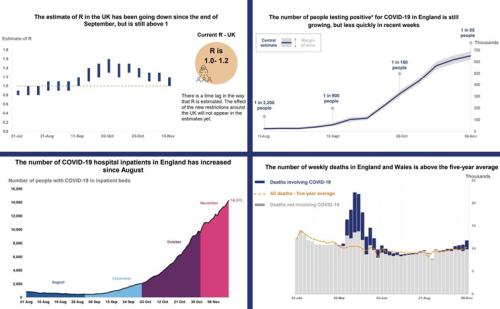 Next, we have a slide deck from the televised London briefing of 18 November.

The detail less important for our purposes than the presentation.

Plenty of tactics to spruce up charts on a bid or internal data show.

“for every day that we release [lockdown measures] we will need two days of tighter restrictions”.

Whatever your stance on the sentiment, it is well crafted phrasing.

It brings elements of urgency. That trusted seller’s friend. As well as framing the scale of (in)action.

Your ounce of prevention worth at least a pound of cure?

One step forward, two steps back?

Is a bird in the hand worth two in the bush?

Do those who adhere to the delayed gratification of the famed Stanford marshmallow experiment really achieve more in life?

There are several applications. For instance, Whilst it might be tricky to say this to some prospects, many a time such a warning rings true;

‘for every month you delay going ahead, you will fall two months behind your competition’.