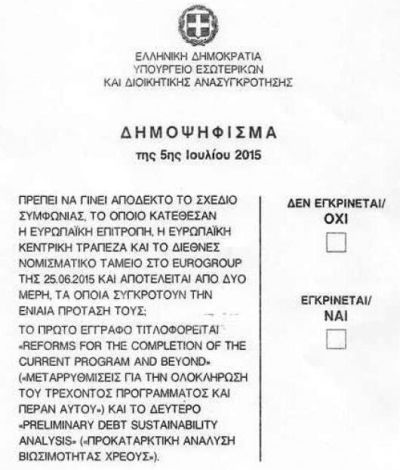 This week’s baffling potential Grexit development is their Greferendum.

I’ve blogged on learnings we can take in solution sales from such ballots’ questions. Specifically the best ways to sum up your bid’s central defining, unique attraction through this technique. Take one slide/page to frame your proposal’s key question in your prospect minds.

A straight Yes/No uncovers real intentions and grey area work to be done.

Make the question as simple and short as possible.

Own the Yes and you apparently are more likely to ‘win’.

(Although in the context of Scotland’s indyref, the No side won. And there’s debate about whether the upcoming Brexit answers should rather be In/Out.)

The pic up top has sped around Europe.

It is the very ballot paper that awaits each citizens’ ‘x’.

Even for non-Greek speakers, there seems an awful lot of text on the question-side of the sheet. “Long and vague” is a typical report comment. “Lewis Carroll-esque” is the best description I’ve heard so far. This is a translation of paragraph one;

“Should the proposal which was submitted by the European Commission, the European Central Bank and the International Monetary Fund at the Eurogroup of June 25, 2015 which consists of two parts that together consist of their comprehensive proposal be accepted?”

So, both too lengthy and utterly incomprehensible.

When I first saw the question, a reporter was showing it to many pensioners queuing for cash rations outside an Athens bank. To universal derision.

Not only is the question confusing, it is completely unclear what on earth a Yes or a No actually means. There seems no idea on what will happen in the event of either result.

I was thinking that if I was presenting my own Yes/No slide in the next couple of weeks, I’d first display this Grecian contribution.

I’d be able to talk about simplicity of questions, clear outcome consequence, then show my own next.

Then I read a history of dodgy plebiscite questions courtesy of the BBC.

Fascinating to hear of Canada’s Clarity Act, the ‘bias’ of placing ‘no’ before ‘yes’ and various dubious referendum papers from the past (from German 1938 Austria and 1978 Chile).

If you’re running a internal training session around this, then you can show comedy designs for your key bid questions. With different size boxes and ‘leading’ design fills. And even your own gobbledegook question.

When it comes to prospect eyes, best leave the funnies to the professionals.