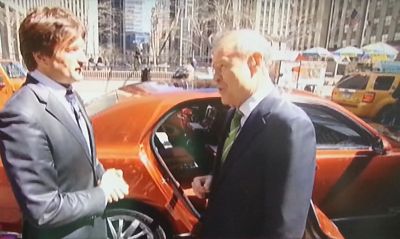 Here’s another example of a chief exec trying to give it The Big Sell.

The head of car maker Bentley’s N American operation, Christophe Georges, snared a couple of minutes on Fox News. My screenshot above sees him (left) interviewed by Englishman Stuart Varney, round the back of 48th Street, New York City.

Standing alongside the top-of-the-range $405,000 model, the host pressed him. “Sell it to me”. I noted the response:

It shouldn’t be so difficult. [both chuckle]

This is a car which sits at the pinnacle of the automotive industry.

The ultimate expression of Bentley values in terms of outstanding luxury and performance.

After the obligatory presenter-summary sentence, he next asked, ever-so-slightly dismissively, “what’s the best feature on this thing?”:

The level of craftsmanship.

It’s all about luxury but what is luxury and true luxury, which is behind it.

As if labelling something so expensive as a mere “thing” wasn’t enough, he goaded further. With an ‘objection’. Was it “classy, or just a bit too flashy?”:

It is an extraordinary car but it is not a vulgar expression of your taste.

It is made for the connoisseur.

People who understand what is the substance behind luxury.

Then all manner of hardwired ipads, pure leather and colour options were ran through. During which more high-end phrasing could be heard:

Refinement
Everything is authentic
There is nothing fake

I always listen closely to this kind of pitch.

In this particular case, my interest was heightened as English is clearly not the managing Frenchman’s mother tongue.

Which makes me wonder on how carefully and with whom such phrases are chosen.

In this case, there’s a succession of words all meant to position Bentley as the Number One for Luxury. Whether this is true in reality, I’ll leave to the petrolheads. Or billionaires.

Yet as I tend to gravitate towards helping those who are deliberately not the cheapest in their marketplace, we are given a juicy selection here;

Not forgetting the word most used;

CEO’s usually make a real hash of this.

There shouldn’t be an excuse for it.

Whilst Christophe did alright here, he didn’t quite hit it for six.

Too much on ‘features’, not enough on ’emotions’. More ‘whats’ than ‘whys’.

I began to ponder that if the car behind him was a Maybach or Rolls say, would his music play the same tune? Especially having seen the excellent documentary about the recent re-run of six one-million-pound classic 1960’s E-type Jaguars. With all its attendant handicraft, personalisation and, perhaps most strikingly, heritage storylines.

Still, attempts at distinguishing on being “better” than the rest can readily take from the language of Monsieur Georges.

As a final tip, he was asked at the end how many they’d sold in this year’s first quarter. Sadly he sounded like a bean counter:

I remain amazed at how blandly such stats are ‘reported’.

The precise figure and a percentage increase.

Firstly, you could remove number-blindness.

for every five that people drove away last year, there’s six bought this.

Then there’s the absence of wider context.

He did mention that the US was still their biggest market, with China second. How about a line to show trends here?

And what of a competitive bar?

Yes, figures can be spun to mean anything, but there must be some number somewhere that shows where (or why) they’re top dog?