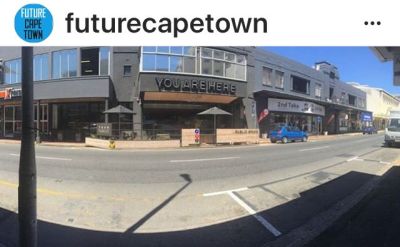 Have you a single pic that sums up your argument?

A while back there was a wonderful movement to create public areas where there were none. On my local shopping main road, a couple of street parking spaces were replaced with a purpose made “parklet“. A small curated place where pedestrians can take a breather.

This one remains in fine fettle. It even has free wifi. Well used and respected by all locals. Only now it has been wrongly forced to move. Miles away.

There’s always someone, isn’t there? A pair of shops started moaning. Claiming the people’s parklet was bad for business. Selfish, Nimbys, Inertians.

So as part of the completely deserving campaign to keep the parklet, this pic above was one of three posted from different angles on a particular day.

It clearly shows that the chief objection of parking bays in short supply damaging trade is nonsense.

As you can see, available bays abound.

Each snap shows a half-dozen free.
A powerful image. A clear message.

So, have you a single pic that sums up your argument?

I note that taking photos is not as easy as it may sound.

For starters, can where your sparkle bring magic in reality be captured in this way?

Some concepts are obvious, other less so.

Then there’s the vexed issues around ‘permissions’. I’ve infamously got “detained” for happily snapping away around a client site. Some places slam shut like a communist China minder, others encourage shares like a London tour guide.

In tricky arenas, how about asking an ally prospectside for a cheeky photo? What do they think fittingly encapsulates the problem?

Sometimes you agonise over a thousand words. Isn’t your time better spent making lasting impact from your own simple slide-decklet?