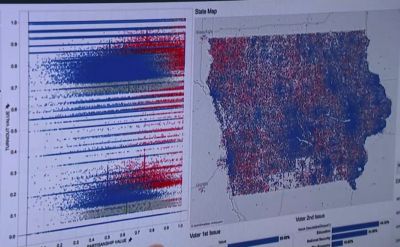 He mined intel from the Democrat side. Jim Messina managed Obama’s data teams. From 2008 to re-election in 2012 it’s crew grew from 12 to 165.  At which point ‘they even boasted they knew all the names of the 69m voters for Obama’.

As Crick surmised, they aim to “capture the expressions of all American minds”. I wonder if your lead gen effort have a similar mantra?

As a presenter of data, many a solution salesperson would acknowledge the imagery deployed. The above screenshot is from this wider dashboard:

This alone though is not what five mil buys you. My main point is psychographics.

Here’s the example they ran through. Baffling to a European, America is a land that seems to think paradise is a place where people openly carry guns. Everywhere.

The whole battle around this concerns their constitution’s Second Amendment. As not everyone shares a vision of paradise, two differing messages prepared are presented. One if you’re concerned about burglary, the other if you appreciate ‘heritage’. 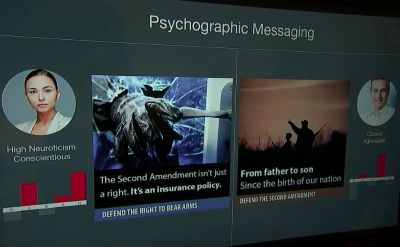 Any seller knows the importance of such nuances.

Yet far too many salesteams are still stuck in demographics mode alone.

This brought to mind a generation past’s famous voter analysis. The 2000 Bush campaign sneaked home in part due to uncovering that you were virtually certain to lean his way if you both owned a dog and went to church. Getting these people out to vote made him.

And it is with this latter category that selling fortunes are found.

Yes, you no doubt are pretty sure you sell best to a particular sized opportunity. Employees, turnover, seats.

What about how they think? Progressive, conservative, leaders, followers, problem tacklers, mend-and-make-doers.

Where the killer skill is perhaps in linking two seemingly irrelevant or inconsequential pieces which when combined, mean you’ve found your gold.