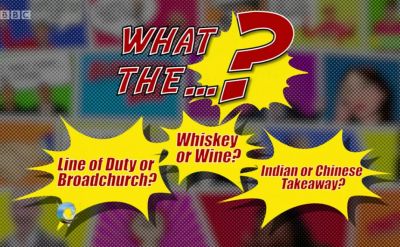 Here’s a cheeky BBC cartoon graphic in keeping with their core brainwashing values.

This time, thinking it clever to sneer how “boring” the current snap electioneering and the likely winner are.

Frontrunner Theresa May faced that staple of magazine quizzes. Choose from a binary pair of options and let us all into the secrets of your real personality. The trio highlighted here were;

Line of Duty or Broadchurch?

not seen either :: it depends :: I cook instead

On the telly front though she has watched Sherlock and Midsomer Murders, albeit with no preference expressed. She may have approached these cautiously, given the plain sight trap of “Merkel or Macron?” (she’ll work with both). Oh for the Facebook Live event suggesting “strong or stable?”

I once saw a former music scribe turned popstar asked similar. One was which radio station they listened to most (for UK readers; Radio 1 or 2).  He and his duo partner went for different stations altogether (Radio 3 & 4). Cue frustrated chuckles from the lady with the mic. After a short barrage of these type of queries, with the interview ended, the popman let his guard down a touch and empathised with someone from his old profession. “Those questions sound so simple but are really hard to write”.

Either/Or. This or That. Quickfire choice. Ice breakers. Conversation Starters.

You cannot say ‘we’re coming up to the end, here’s some fun’ and ask a prospect ‘boxers or briefs?’ Imagine if they answered ‘commando’. Ew.

But you can ask them to plant a flag on a pole in your planet and so gently reveal a little marvel of their mind to you.

Pretty much any scenario can be framed as a potential dilemma. Blue pill or red. Yin or yang. Two sides of the fence.

General themes for our solution selling build from concepts such as; what we’ve always done or something different, on-costs or day-one cost, standard or bespoke.

When you know what potentially mutually exclusive alternatives exist in your realm then you can slip in a friendly yet fiendish question early with your prospect to uncover their thinking.

footnote; when consulting the wisdom that is the internet for examples of either-ors there’s a slurry of “favourite” or “most hated” tropes you could possibly riff off too. As well as the style of delightful “first date” fodder which yielded this gem; How long before you leave for a trip do you start packing?