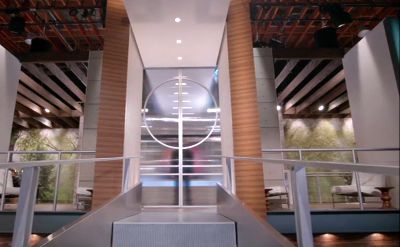 Much media chatter surrounded Apple’s first foray into “content”. They say they’ll spend a staggering $1bn on their first year of tv output (the beeb muddles by on ≈£2½bn). That they chose something this safe and self-serving as a start is a little surprising. Especially as none of the lessons the genre has learned appear to be noted by this production. Chief among them being pundit credibility, too much sob-story styling and no real sense of dramatic arc.

Still, a show where wannabe developers pitch their world-changing app ideas revives the end of 90s crackle of dotcom ambitions and so you really want it to work. That it falls a little flat is slightly meh. But at least we do get to see pitches. Three to a ‘celebrity’ app panel, then two later who progress to an investor pitch.

The show does not start off well. Here’s the opening remarks of the host. A Kiwi DJ.

“You have four advisers down there. It’s about making sure they understand how passionate you are.”

The snapshot above shows one interesting treatment. For the first ’round’, pitchers enter from those frosty doors to descend a moving ramp towards the seated panel. The trip takes precisely sixty seconds. By the time they reach the end, if a judge has buzzered, then they can continue their sell.

Looking for “ideas that change our lives”, first up let you put furniture into your camera video shooting of your own place.

This was Number One. Under pressure to set the show’s tone. After these crucial intro six or so minutes, would viewers switch off or stick through?

The pitch was a touch stilted, but with the two female panelists giving the green light, proof came that the wow can often be a visual punch. The demo was an instant hit. “Pair” earned the right for a longer discussion. Like playing Pokemon Go to kit out your house. But then you smelt the whiff of impending disaster. The founder got pushed towards swapping chairs in lounges to dresses on people. Crazy. Stick to solving one problem. Don’t even think about moving on to another without absolutely nailing the first. Even then, probably best to leave any other well alone.

Here’s the text of the founder’s actual pitch;

“Everybody wants to make sure that their home design is beautiful for your friends and family. Unfortunately none of us are designers. So I set to solve that problem with ‘Pair’. Pair connects you with the professional design community And finds you the inspiration you need to design your space beautifully. Simply drag and drop one of our thirteen thousand brand name products into your home, walk around it like it’s real. This gives you the perfect understanding of what you need in your space every time. All in augmented reality. Thank you.”

Our host got gooey. “You crushed it!”. I shan’t dissect each pitch. Suffice to say that the ‘problem’ he sets out as solving is not the one which you realise he is actually putting right for table and chair buyers.

Enough of the commentary. There’s plenty of it about.

The apps that followed (eg for dating; “there are thousands of dating apps out there, but to be honest with you, they all suck”, dismissed as creating – so deliciously by will.i.am – “a sausage fest”) tripped up along similar lines.

Loose problem definition. Nor tightly homed in on a specific user. Not knowing why precisely paying punters part with their hard earned. And demos that could have been from twenty years ago, which might as well be showing successions of screenshots, when live, ‘process’ success (as with the furniture guy) is the way ahead.

After a mini collage of half-dozen Nos, two app founders got propelled through a “six week accelerated incubator phase”. Apparently, an “exciting” “transition”, which aimed to “bulletproof” their business before a funding round pitch in New York to VC’s who “currently have over four billion dollars under management”, Lightspeed Venture Partners.

I was hoping for pitch improvement. Alas, with advice to her ‘protege’ actress Jessica Alba was off the mark. She aimed to help “make that VC feel like they’re going to miss out if they don’t jump on this opportunity”. Our furniture chap had gone big on the tech he was pushing. O-oh. Maybe he should have given out cardboard red and blue lens specs his local 3D cinema no longer need. His entire business had changed. Was he now selling picks and shovels to dig for gold, or going panning for it himself? It didn’t go great.

Jessica did well to re-focus with her instruction; “what is different about what you’re doing than what everyone else is doing?” But perhaps inevitably, the end remarks were blunt; “this stuff is really complicated and you got to get better at explaining it”.

Advice to the other team pre-final pitch included the gems;

Then with what possibly was the fifty-minute watch ‘champagne moment’, the mentor finger click and circle hand shape to signify zero marketing dollars spent so far was so American, I might have to try it myself!

Explaining they developed their app at Uni, their pitch had begun, “we found a real need for safety on campus”. It was a personal security app, helping you share your location with friends or them specifically to know that you’re alright. They won the investors over. The episode payoff was the glow of a million dollar offer.

It felt good. The fact you get brief peaks into the prep for the money pitch, then that pitch itself looked a progression in the genre. But. For the solution seller, there may well not be enough goodies to justify investing 500 of your precious downtime minutes.