It sounds like the title of some highbrow Oxbridge debate; “This House Believes An Unelected Head Of State Is Morally Indefensible“.

With political change coursing through the European air, the British wish to vote for their ceremonial figurehead, rather than have one foisted upon them inherited through arcane birthright, seems to grow.

Their appears to be a movement hoping that behind whose banner those sharing such view can coalesce. Simply yet also perhaps damagingly (what chance if even Australia, Canada nor New Zealand to name just three don’t unshackle themselves?), named Republic; “Campaigning for a democratic alternative to the monarchy”. 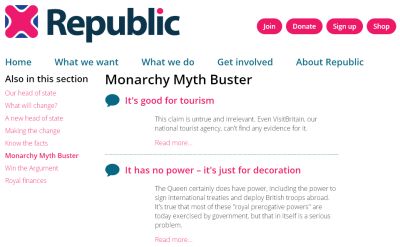 The above screenshot shows fascinating insight into framing our Solution pitching.

Note in particular their ‘myth buster’ and ‘win the argument’ pages.

You could almost slap these headings straight into a meeting plan for coaching your chief prospect ally.

As well as ensuring they become part of internal dialogue, training your salesteam in how to head off certain proto-objections before they occur.

What sector, company or product myths must you bust? What strands or poles of argument exists that you must beat?

And have you a plan to ensure you prevail in the face of them so that unlike when subjected to an appointed monarch, you don’t suffer your equivalent of a millennium of dark ages under their yoke?