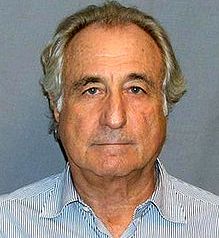 Billion dollar fraudster Bernie Madoff is of course the face of all that’s wrong with the Finance industry in the aftermath of the recent recession.

Documentaries have progressed since the crime was uncovered from merely explaining the extraordinary scale of robbery to trying to understand how on earth it was able to take place. And for so long. Much of the anguish centred on the vocal whistleblower that for years was disgracefully ignored by the authorities.

The latest such show I caught listed several reasons for the scheme’s growth and longevity.

Of them all, I realised that three were shameful corruptions of legitimate techniques that could be used ethically in solution sales.

Sounding like American for word of mouth, it was incredible how the clamour to be part of his investment fund spread among elite society. He expanded contributors by pitching involvement as holding membership of an exclusive club. Only the wealthy with the ‘right’ contacts could apply to ‘join’.

There was seemingly no outward touting for business, instead seeking to create a silent stampede to sign up.

Another reason for the stark take-up was that returns weren’t astronomic. They were believable. Rather than market-shaking, they remained in a band around 12% a year. Year in, year out. The fact that they were steady and not outrageous, although unusual, lent credibility and generated desirability.

Extol the virtues of consistency, privacy, enthusiasm for belonging and risk removal and you could be onto a winner.

I winced through the invention of the term ‘conman’. It apparently comes from this question.

“Do you have the confidence to give me your watch?”

The first known usage of the term “confidence man” in English was in 1849; it was used by American press during the United States trial of William Thompson. Thompson chatted with strangers until he asked if they had the confidence to lend him their watches, whereupon he would walk off with the watch; he was captured when a victim recognized him on the street.

Asking whether prospects have “confidence” enough in you to commit to a pre-sale ‘sale’ can pay significant dividends. Whether it be a mini-order, permission or time designation, it’s always a worthwhile tester.

Start off with people like you. Madoff swindled religious and philanthropic organisations. He lulled them into thinking he was ‘one of them’.

With whom do you share a common bond? Which people in what companies think the way you do? How can you provide the evidence and comfort that you’re kindred souls?