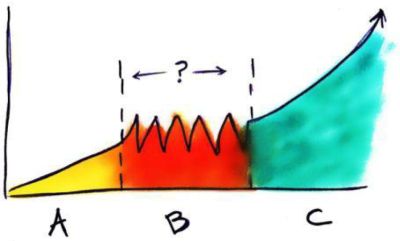 This is the story of how crm vendor salesforce.com developed their internal sales function. As the subtitle explains; Turn Your Business Into A Sales Machine With The $100 Million Best Practices Of Salesforce.com.

Whilst I was so glad to read this book, I felt a particular frustration reading it. I bore close witness to the market these learnings came from at the very time they took place. Albeit in England, rather than the typically insular America of the authors (the only thing non-American in it is bizarrely a chapter opening decorating quote from a 20th century English DJ).

Yet this meant I knew one significant environmental point to be annoyingly ignored. Salesforce-dot-com were first into a space that was widely expected to explode. Momentum was building threefold; every sales leader was either keen to move from spreadsheets or progress from first generation sfa, every IT head knew they could potentially outsource a huge headache, and every Board wanted to see inside the one stubborn department that remained blind to enterprise-wide technological control finally brought into their gaze. So timing contributed greatly.

It reminds me of the Freakonomics findings about why the crime rate really fell in 1990s New York. “Broken Windows” policy took the glory whereas it was more due to legalised abortion two decades prior.

Added to this was the astounding fact that no-one else seemed able to adequately challenge the first-mover. From the obvious candidates inside their wider family (Siebel & Oracle) to potential young buck entrants (Act & Goldmine) the lack of fight was frightening.

My own experience in the “no software” field after the turn of the Millennium exposes that sales would have been high for them almost whoever was in charge. And I know this in part because I met the southern England salesteam a couple of times a decade ago and was shocked at the lack of calibre contained within. Which does take a certain gloss off their recollections.

Further truth-stretchers gnawed away at me too. They are disingenuous to claim theirs is a no-cold-calling system. It is not. Their flawed definition of cold calling is not one shared by the majority of reps that have ever done the task. Relative degrees of freezing may help ward off phonephobia but a first-time call is still a cold call.

Still. The central premise got me applauding. It is lead generation that underpins large, predictable sales.

And for focusing on that alone the authors deserve much credit.

They seek to systemise how to shape a funnel mouth that guarantees a supremely wide and lucratively flowing spout. As you’ll likely know, I’m ‘process’ mad. So this knocks at the most open of doors with me.

At its heart this is all about how the quality of your sales results are governed by your lead generation efforts. Rubbish in, rubbish out. When merely ‘conventional wisdom’ is applied, as is almost always the case, you’ll hit a ceiling of leads and growth stalls. In short,

They herald their ‘hot coals sketch’ of the cover shot above to explain this hazard.

So the book spends the rest of its time detailing the systematic approach to lead generation (and consequent near vertical sales take-off) as proven by their trial and error anecdotes from the early days of salesforce.com.

There’s much to admire.

In reference to a key point I made earlier, here’s a delicious quote; “In high-productivity sales organizations, salespeople do not cause customer acquisition growth, they fulfil it.” And there’s sufficiently more of this ilk to keep you turning pages. Here’s another. “Why is it easier for people and companies to do more of what doesn’t work than to take some time to figure out what does?”

There’s also plenty of neat steers along the way. True demarcation of responsibilities, the different types of call (scoping, discovery, mapping, re-qualification), what should be your key numbers, the essentials of correct and shared classifications, call plan and flows, how to create an ideal customer profile with punch, elevate respect and standing of ‘outbounders’ and occasional ‘charts’ like the top 6 prospecting perspective mistakes.

There are sadly issues. I hated the quasi-‘internet marketing’ feel of some of the writing. The type that peddlers of what I’ve seen term ‘frauducts’ claim to allow you to sit on your couch and watch the millions drop in via paypal. Provided you pay hundreds of dollars for useless DVDs, books, seminars and tales of how it was done by those merely updating pyramid schemes. The unwillingness to share email templates and vagueness around how to construct key telephone discussions fell into this mire.

I’m also disinclined to favour some of the detail. The voicemail examples just don’t work. Much of the ‘sell the dream’ part was hard to swallow. Then there’s their favourite scripted line, the opening to any phone call which they mandate; “Did I catch you at a bad time?”. Although I am intrigued enough to test it myself now, as I’ve enjoyed using the Ari Gapler humble stutter opening. And as for the cultural engineering part (V2MOM), I was screaming at the page then. They dismiss such initiatives as being dictated to the coerced masses like living under communism. Yet there’s was different. Yeah, right.

In summary, there are worthy ideas for systemising your lead machine here. I warmly welcome any such promotion of process for what should be the flagstone of your sales endeavours. As the authors themselves say, find what works for you by a serious commitment to testing. And rewards should follow.