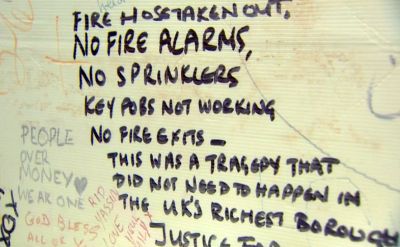 This week saw a tragic highrise fire. Near where I once lived around West London.

Coverage of the tragedy suggested that perhaps fire brings us a lexicon of selling terms in a similar fashion to the military.

There’s a flashpoint. An accelerant can fatally fuel the fire. Fire loading (debris, water and the like gathered on floors) can collapse ceilings below. An air gap or void can create a flue where the movement of air changes from slight draught into a dramatic suction propelling unstoppable flames.

This last factor seems to have taken hold in the London tower block. Known as the chimney effect.

Maybe a bit like anything that happens to suck the life out of your bid.

Something that rapidly drags us from in the frame to blown out.

Probably in a way that turns us from being promising player at the coal face to totally disregarded at the top in one fell swoop.

The nation rushes to have answers when an investigation will take months. Into this vacuum the media chucks all manner of reasons why such devastation was wrought.

Some focus on the preventative measures that did not feature.

If it it turns out the fire began with an exploding fourth floor fridge, then most comment that the design of such building is for the fire to be contained within that space. “Compartmentation”.

In the absence of sprinklers, rapid fire spread out of control.

Then there were the lack of any firebreaks that should have stopped the flames licking up the sides of the flats. But the uninterrupted chimney effect saw them engulf the whole place in those stunning catastrophic seconds.

We know that if a selling one occurs, we simply lose the deal.

What precisely is such fire event?

So what firebreaks have we put in place?

How have we shaped our process so that the rare yet deadly flashpoint does not prove ruinous?