As World Cup Fever grows, the brainest person on the planet has spoken. England’s football penalty takers “couldn’t hit a cow’s arse with a banjo”. A scientific term that, he tells us.

As you may know, I love a good formula. (Here’s another via Eurovision from just a few days ago).

I get frustrated with many a salesteam that think ‘process’ means solely a time-stamped sequential progression of activities. It does not.

When you deal in the realms of formulae like Stephen Hawking’s here, you get an insight into how salespeople (and salesteams in general) can really start to set themselves stunningly apart.

Despite its tongue-firmly-in-cheek nature, there’s plenty to take from how the megaselling Big Bang explainer calculates England’s (meagre) chances of lifting the world cup in Brazil come this July.

He prods the shaky with mathematical jargon. General Logistic Regression Modelling. Now there’s a thing. Yet what he’s doing is simply spotting patterns. What has worked before is likely to work again.

And therein lies the beauty. As he sets out;

“[Ing-Er-Lund’s] chances of triumph can be worked out by looking at a number of environmental, physiological, psychological, political and tactical variables”

Five categories of factors. And spookily, such sales success variables strike me as being remarkably similar.

So it seems that England tend to win when they wear their red strip, play in 4-3-3 formation, kick-off close to 3pm, in temperate climes, at low-altitude, and with a supposedly more understanding European ref.

No chronological order or series of steps.

Simply six variables that when all in place, are more likely to lead to glory.

And our Sales campaigns are very much like this too.

What are the half-dozen elements that can be at play? Ones where when they point in the right direction, tend to lead to gaining a signature?

Straightforward analysis of deals gone by should reveal plenty.

Take the Professor’s lead as a starting point. Use his five variable classes. You could even amend the names as required. (Say, environmental, muscle, mental, political & tactical.)

Can you isolate the elements that make the difference? And crucially can you also pinpoint where on their scale you must be to prevail?

And finally, relax. It does not need to be as scary looking as his original equation. We don’t need Dark Matter Particle Physics maths here. Although if you’re prepared to do a few minutes extra thinking, I’m sure you can conjure something that’ll either get your team (should you have one) thinking hard, or (if you’re a lone wolf) really let you home in on what makes the difference and can propel you to sustainable glory yourself. 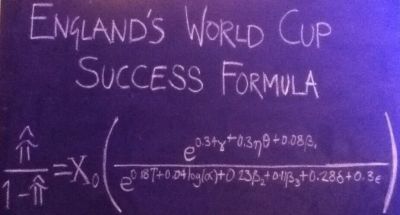