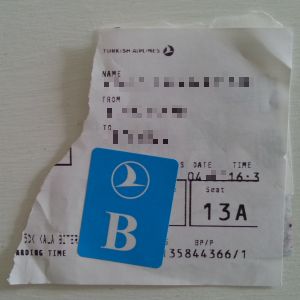 The Abu Dhabi golf tournament seems to be the sport’s big annual kick-off.

I saw hot World Number One Rory McIlroy give an interesting press conference in between warm-up rounds.

He always starts his year flying to this event.

So each trip he takes out his boarding pass.

He writes his goals for the next twelve months on the back.

Puts the card in his wallet.

And doesn’t look at them again until on that next plane to the Gulf this time next year.

Remarkably, given he bestrides the game – top ranked player and reigning back-to-back major champion – he divulged he had not managed to hit all his goals for 2014.

I wonder whether they’re exclusively golf, or if personal aims come in to view.

In any case, the simplicity of this is not lost on me.

Especially given the impact brevity has in Sales. Everywhere.

With our own kick-off conference season upon us, this strikes me as a potential exercise for salesteams.

You could even print out a mock-up boarding pass card(1), hand out and tempt all salespeople to do as Rory.

Write their own goals out in whichever form you/they choose(2).

There’d be no pressure for them to share too.

For sure, some won’t want to play.

And that’d be fine with me.

I’d even say so upfront.

But for the engaged majority, it could focus the mind that precious extra little bit.

(1) For a little tailored creativity, bedeck your version with your livery and colours to become your own ‘airline’. I realised when I took a pic of a recent boarding pass of my own (ripped thin paper displayed up top) that the old school thick card classic tear-off design will soon be no more. So before everything goes screen-based, why not have a bit of fun with it. See the thumbnail below of my posting in Instagram I did same time as this blog for ideas. Sure you can come up with even more…

(2) I’ve known some companies have their own style ‘goals’. Variants of the 90s balanced scorecard for instance. One commonplace structure is “smart” goals. I first learned of these six years ago. And considered an update a couple of years later. So you could even use this as a salesteam learning exercise about such goal framework. 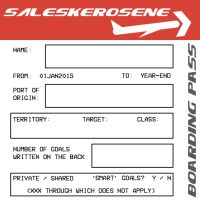