The first few days of January can be a tough selling time.

Your target market have their own stuff – rarely yours – to focus on.

Your cupboard may well be bare too.

Where’s the time for taking a breath?

I was talking recently with someone who – although their judgement now lies in tatters – knew what to do in such circumstance. She said;

By which, she did not mean deploy the dodginess of one modern day definition. In her native S Africa, hustle has positive roll-your-sleeves-up and commit connotations. In my English she more meant bustle.

Keep on doing what should work. More of it. Don’t cut corners. Tweak, build, lift where necessary. Know the winning process and pursue it.

I found this slogan below online. Not quite how I’d put it. But the sentiment moves in the right direction.

From the same site, I also remixed another graphic which highlights the good old expectation-reality gap.

There’s many a salesperson that can get wrapped up in a negative spin this time of year. You won’t be one of them. 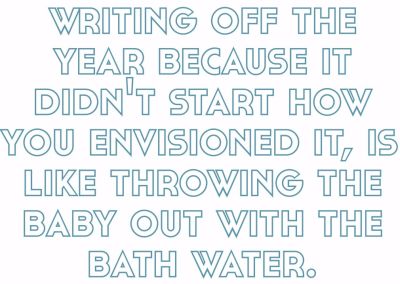