Sales and Marketing make restless bedfellows. It’s hard to find good words that either side says about the other. The very fact that different ‘sides’ is accepted language belies comradeship and gives a glimpse of mistrust.

So we should hail Rory Sutherland. A distinguished ad man, he certainly doesn’t think all is rosy in marketingland. The joy is, he seems determined to raise the collective standard.

His video on TED, Sweat the small stuff, found its way onto my screen. A more worthwhile dozen minutes I may not have enjoyed in front of my computer all year.

His thrust is that it is the small things that matter, yet are mindbendingly overlooked when it comes to thinking up solutions. Here’s an erudite posit from his intro.

A strange disproportionality [is] at work…the tendency of the organisation or the institution is to deploy as much force as possible, as much compulsion as possible, whereas actually the tendency of the person is to be almost influenced in absolute reverse proportion to the amount of force being applied. So there seems to be a complete disconnect here.

So, the more you tell someone to do something, the less likely they are to do it. Sounds like a conversation with my mother. The larger point he travels towards is that throwing vault loads of cash at something nearly always fails to address the things that matter; details. He continues into the meat of his argument.

it’s the small things that are most potent

Some of his marketing examples leave you nodding at their genius. How tiny ideas at virtually no cost can generate more goodwill than millions of ad dollars (cute salt cellars engraved with “Stolen from…” on a plane and Swedish hotel lifts with your own music) and simple usability goes untackled within large projects (Heathrow’s T5 having no train signs or lift buttons and his crusade to drop balance display from online banking to generate more usage).

Why, he wonders, do people spend so much money on grand schemes but forget the details? Then he produces this graph. 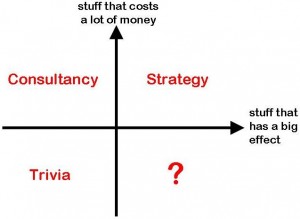 He’s at pains to say big thinking has its place, but it should not be the only focus. What he recommends is that we create something akin to a “chief detail officer”. Someone with lots of clout, but no cash. Find and push through little things who’s change will bring about massive rewards.

His problem is that we do not have a description for activity in this vital 4th quadrant. He reckons we need a new word for it. I trawled the web to see if any such neologism had emerged. Regrettably it has not. I tried to conjure a winner pre- or suffix with all sorts of nano, micro and David type hooks, but to no avail.

Still, it’s a cracking idea and one adoption of which by any salesperson can only but benefit. After all, when are we ever given any meaningful budget to do anything new anyway? This should at the very least gives us hope we can make things happen.

As a footnote, surfing his blogs (via Brand Republic & The Spectator), I found a couple of wonderful views on that stable of solution selling conundrums; change. Use wisely and spectacular results will surely follow.

A large force behind the aversion to change is actually not fear of change at all — it is fear of loss of control, and fear of the irreversible

as Buckminster Fuller had it, “You never change things by fighting the existing reality. To change something, build a new model that makes the existing model obsolete.”