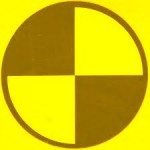 There’s an American research team that can predict injuries suffered in a car crash. They do so seeing only the state of the crumpled wreck. This isn’t just impressive for a party trick. It hugely saves lives.

When one of the team used to arrive at crash scenes, he was devastated to be talking to survivors that seemed perfectly alright, only for them to perish in front of him through unseen injury. This compelled him to try and avert future such tragedies.

The work has made significant ground. A 2011 BBC Horizon documentary showcased the global community progressing towards their ultimate goal; no more fatal car crashes and the saving of the estimated one million lives lost on the road each year.

3 crashes in 1 – the initial impact is only the first stage, the collision of person with car interior follows, finally the most damaging clash is that of the organs moving inside the body.
Brain damage spreads – the most delicate organ is the brain, loosely attached in the skull, there’s a race to save neurons as only around half of eventual damage is caused at initial impact.
The Golden Hour – the critical first sixty minutes after which treatment has little affect.

A Miami team created their Urgency Algorithm. As they illuminate;

The algorithm offers a means to determine the likelihood of serious injury in the event of a motor vehicle crash. The algorithm, based on historical crash data, relates crash characteristics to injury severity outcomes so that the most appropriate level of rescue care can be provided rapidly, accurately and remotely in future systems.

Tremendous work indeed. When it comes to sales process, there is a startling parallel.

I get to see countless forecasting frameworks. Most are spreadsheet based, even if there is a central crm system that can hold success pointers. They are typically centred on percentage chances. And in most of these cases, the deal value is multiplied by the arbitrary likelihood to provide an overall figure. How these probabilities are derived is mind boggling. The rep will tend to raise their moistened index finger into the breeze. It’s pretty stone age, isn’t it?

Many salesteams apply qualification criteria to determine funnel appearances. But how deep do these go in your pipeline?

Can you spot the hidden signs that suggest the light of life may soon be extinguished from your supposedly sprightly deal? What’s your campaign equivalent of the crushed chassis and bent bodywork?

If you’re searching for a steer here, then you can take heart from how the Miami experts seemed to start. Look at a potentially hairy incident where all emerged unscathed and plot back from there.

For instance, do you win say, four of every five deals when you get a prospect on-site to a client reference? Or lose one in two when their CEO declines your corporate jolly offer? Perhaps two of each three come your way when the prospect pays for delivery resource before final commitment. In any case, there will be indicators out there that you can shape into your own urgency algorithm – and if you formalise and evolve them, I guarantee that they too will increase your chance to prosper.