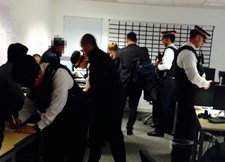 Based in Barcelona targeting mainly Britons, so far 850 ruined victims have been identified.

As you can see from the pic released above, officers found a room exactly like most telephone sales operations. Open plan pits with large scoreboards dominating walls.

Their modus operandi was simply to push retirees into investing money in must-win trades. As the report states, the fraud saw investors…

Many investors had suffered devastating financial losses and emotional distress.

As one elderly and now “broke” victim explained, he lost £22,000 by yielding to the high pressure exerted that he had to invest then and there or would miss out on the doubling of his lifetime’s savings in just three months.

An author whom appears to know this world well is Jeffrey Robinson. And in part, he says they exist due to the victim’s;

In fascinating insight, he adds what we all deep down know;

If it’s too good to be true, it ain’t true. It’s that simple.

So. We all know the need for urgency. We all have end-of-period deadlines breathing down our necks. But how outlandish are our claims?

Are the riches we bring believable? Can a real case of an actual person that’s seen such wealth delivered through us give proper and verifiable vetting?

There are no real world get-rich-quick-schemes. But get-rich-a-touch-quicker is out there. Which side do you favour?