Back in the last century there was a thing called radio. Just as MSM tries to cling on to ‘relevance’ by being ever more Left/Right (delete as you think appropriate) so too audio-only media fails to heed the changes wrought by democratisation of broadcast opportunities.

In the music world, getting your song on the airwaves faced ferocious competition. Fair and foul.

Husband and wife writing duo of Cynthia Weil and Barry Mann came up with a tune they called You’ve Lost That Lovin’ Feelin’. Everyone involved seemed worried that the wonder of their treasured creation wouldn’t get heard. Because, at four minutes, DJs would deem the ballad too long and simply stick to multitude of shorter pop on offer, meaning more space for ads and more revenue.

As no-one wanted to crop the song, they sought to remove this objection occurring.

When the vinyl was pressed, the idea (attributed to studio engineer Larry Levine) was that the track time printed on the label didn’t quite match the actual length. 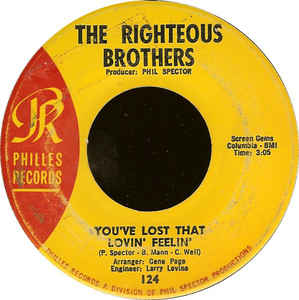 The song now pitched at about four-fifths of its actual length. A lopping off of the vital 20pc that made the song appear the happy-to-accept length of three minutes.

So the tune got picked up and played. And played. Becoming the most played song on American radio throughout the entire 20th Century.

Each can have a handle along ‘You’ve Lost That…’ lines.

Let’s take one by example.

I remember encountering the pained intake of breath here in my early career.

How much does this cost? A frequent objection stall incoming.

Any solution sell is focused on the value unleashed rather than price tag upfront.

In this case, the response that squashed the barrier – often leading to the pantomime of the serial objector but on occasion generating the grown-up, considered conversation you craved – was,

“well, it depends what you’re looking to do, some customers want the full works for say, twenty grand, whereas others are delighted with one key aspect for below two…”

The most spun-disc was a full minute longer than any station would ever sanction. Yet when it was listened to, any such stipulation was quietly slackened. Can you remove such red herring from your product?