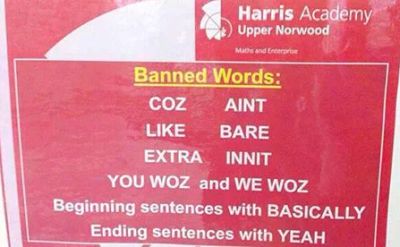 This final offence of YEAH in particular reminds me of something I read over twenty years ago.

Tom Hopkins suggests the Tag On Tie Down technique:

This mainly involves responding “isn’t it” after many a promising prospect utterance.

Channeling an interviewer on telly or radio, briefly occupying a pause to encourage a subject to elaborate and keep talking on the same point. Often digging themselves a hole.

You hear a cousin of this when a salesperson turns a statement into a closing question. By simply adding something like “doesn’t it” as a ‘tag’ on the end. And annoyingly for me, I do catch this kind of ‘close’;

Along these lines South African English has an interesting flickwort. A bit like when people always start off speaking, “Well…”. A type of vocal filler. Deployed like a verbal tick. Pretty much wasteful fluff.

Saffers use this as elsewhere in the anglosphere you might interject, okay, right, yeah, as the other person carries on.

Linguistically, these fill-outs fall in to two camps.

Introductory signals (like ‘well’ already mentioned) and concluding signals. It is the latter which can aim to elicit agreement.

A concluding signal close can be powerful. Even merely popping ‘yeah’ at the end of your sentence can work. Although it isn’t the refined approach. It can come across a tad teenage and unbusinessy but remember, sometimes the most simplistic is the way.

Also, to go overboard is an issue. A machine gun ratatat succession of such closes can really put a prospect off. So best use selectively for bigger impact.

Either way, knowing you’ve a concluding signal tie-down close to tag on in your box is a valuable tool.

You do have one ready, yeah?

(*) Tom Hopkins How To Master The Art Of Selling is a seminal book. Of my 1994 reprint copy, this is from chapter three, question right and sink your teeth into sales success.

It would be remiss of me not to add as a footnote that this School policy hits upon another winning Sales trope. In one sense, like buzzword bingo. There are certain words that every sales outfit ought ban.

I’m not talking just the current corporate flannel – today for instance I learned with horror that it is being mandated in workplaces to replace “fail” with “fall forwards” – or industry insider jargon.

But words that give rise to misleading impressions of what you’re about. Find. Ban. Change.