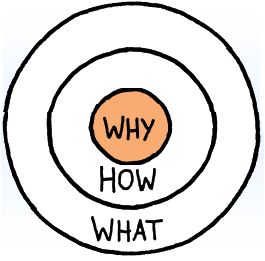 There’s a scale you could draw, along which you can plot techniques for selling new products. At one pole, you have those ideas unique to selling a new product. The kinds of thinking that could only be applied to this specific pursuit. At the other, you have tactics that whislt applying to new product pushes, really should be part of selling any product, regardless of age. General good selling practice seemingly overlooked all too often.

Here’s an idea that challenges this singular axis by introducing the concept of leadership and whether you’re trying to be first-in or a follower. Here’s the major insight.

People don’t buy what you do; they buy why you do it.

Interestingly, you could substitute many other endeavours for ‘sell’, like hiring for a job, with equal impact.

Typically and annoyingly American, a further example lauds the Wright Brothers, whereas the rest of the world realises that it was Frenchman Clement Ader that first flew, but his thrust survives this blinkered indiscretion.

The reason why this is probably more apt for those selling fresh wares, is that it’s touted by him as the only way to both gain initial disciples and quickest follow the ‘law of diffusion of innovation’ to “cross the chasm” into mainstream success.

It certainly adds weight to those that believe, as I do, that you can only succeed if you focus on what you do for your customer, as opposed to solely ‘what you do’.

As an aside the other day I was at a gastropub opening when the manager there asked me what I did for a living. After the odd jokey nonsense, I selected a strand. “One main problem I solve for people is how to sell new products”. I was quite taken with how interested the manager became. If I’d have said something like “I own a software factory”, then I suspect the conversation would have drifted elsewhere with energy draining.

In this sense, it builds on talking about the problem you solve, instead of ways that you operate.

Sell the feeling. The emotional connection that goes with wanting to join together to follow the same path.