Here’s a half-hour item to put on your next internal sales meeting agenda if you get to set suchlike. A moment of levity that can make an important point.

Have you an issue that can be given this treatment, as used so effectively by health investigator and uber-stat presenter, Prof Hans Rosling? 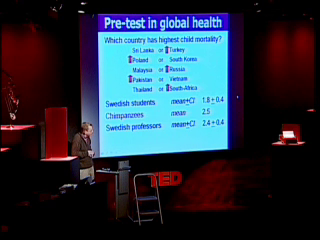 In this 2006 clip, he examines the preconceptions of child mortality. He took five pairs of countries. He revealed at first just these, named. They were chosen so that one country suffered a death rate double that of its partner.

Then he added red arrows, to indicate who endured the higher rate.

He then brought up the line showing how his own students fared when asked for their opinion by him.

A thought nagged him though. If you gave a chimp two bananas, each representing the two paired options, then they’d surely score higher. The crowd snigger.

As a final chuckle, he shows up how his colleagues fared worse too.

This strikes me as a useful sales meeting tool.

It could be ably adapted to all sorts of issues. Particularly ones of product or customer profitability.

Imagine too comparing type of deals by length, impact of competition, engagement with certain role-players, or sectors by re-order.

It might take a bit of spare time commitment, but the impact could indeed make this effort worthwhile to push a policy forward.