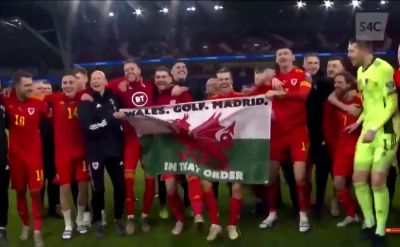 According the Spanish press, these are the current priorities and the order in which they rank of Gareth Bale. One time world’s most expensive footballer. Now derided by media and fans alike in his adopted land for the past six seasons.

It erupted this international break when gleefully stating that he prefers playing for country over club.

Then strangely declared himself fit for Euro20 qualifiers despite not being available domestically for a month.

It doesn’t help much either that he’s accused of not bothering to learn the local language during his years living there. Also put into sharp focus after his Welsh team-mate Aaron Ramsey spoke Italian in his first Juventus press conference, having put in six months of learning whilst still living in London.

The last (who pay his wages) should not be bottom of the list. This is a tale we can use with a buyer into their football;

As seen up top on the feed screengrab of after-match on-field celebrations having qualified for next year’s continental tournament, the player himself happily mocks Spanish media who reckon these are his ranked priorities. What are yours? And what would other people say?