Yes, I’m old enough to know the crackpot compulsion of seeing a foot square tile of incredible artwork and simply having to have the music contained within.

Many such covers were created by the greatest designer, Storm Thorgerson. I delighted in flicking through several of his iconic images last week, after his passing aged 69. Even coming across a commentary in his own words.

On the very first of the above-linked selection, Storm revealed a frustrating point that I’ve heard myself in the Sales field.

The band asked for ‘something different’.

I thought it was more engaging to ask a question and between us we came up with ‘are you normal?’

Anyway, the question led to the idea of normality and what could be more normal than a sheep, all of whom tend to follow each other.

But to be normal you’d need a lengthy dose of psychotherapy.’ 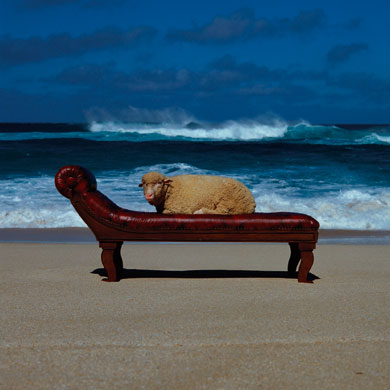 I have vivid memories of being told by chief execs that their salesteam must ‘do things differently’ and to work some magic or other. Yet, just like for Storm, the real results come from a single question of precision.

Being different is nowhere near enough. What must you really do? Inspire? Care? Cultivate? Contribute?

It reminded me of those conversations where you are ordered to ‘think outside the box’. When the seasoned creatives know that the best ideas come from being in the tightest box possible.

Next time you know you need to be different, think about in what exact way…