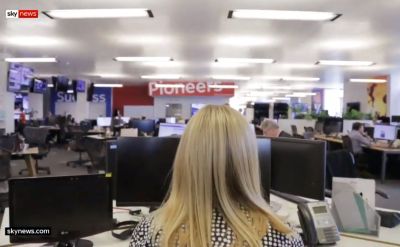 Anyone can be prone to a bit of a nosey moment, right? Who wouldn’t take an interest in how other people’s offices look…

So I was intrigued to see a rolling news channel feature one of their newsrooms as a bumper on their international feed.

I was reminded of blogging on a fictional newsroom from a New York based 1994 film.

The first thought which struck me, was how staged this felt. Because the place was just so tidy. No office I’ve ever been in boasts desks this uncluttered. With a total absence of any personal nick nacks, general detritus or frippery.

Except, there are those two big words.

Bereft of any corporate decoration save for these seems almost unreal.

There’s hardly been any cultural transformation this century that hasn’t featured at least some attempt at promoting ‘unique’ values.

Are this pair part of such drive? Well. It turns out they are. From their 2018 mission statement update;

These are our core values:

:: We are bold
:: We are rebellious
:: We have a competitive spirit that drives us to be first and best
:: We earn trust by behaving with integrity
:: We are pioneers and innovators
:: We celebrate success together
:: We put people at the centre of everything

And where are your sales effort’s equivalents?