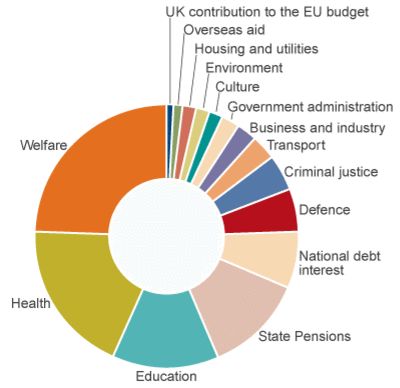 A few presentation ideas from the world of tax.

Both main parties seem to dismiss any chance of tax rises.

The electorate can’t quite believe them.

A few months back, the current government conducted an exercise in transparency and better communication.

They sent a breakdown of where tax goes to every taxpayer.

Each tailored to the amount paid by them.

In the hole of the ring, your total tax paid is listed;

Alongside to the left, this personal total was broken down into each segment in a numerical list. With the feel of straight from a spreadsheet.

Unlike far too many a donut, the centre of this one has a purpose. It is used to ram home that this is a graph personal to the recipient.

A message for anyone choosing this style depiction.

The fifteen colours used are each distinct. Fairly neutral hues. Not a bold, primary tone in sight. None intended to catch the eye first.

Then there’s the web’s reaction to this.

Two that tackle the largest slice caught my attention. First with a simple rotation and stacked bar (and slightly energised shades); 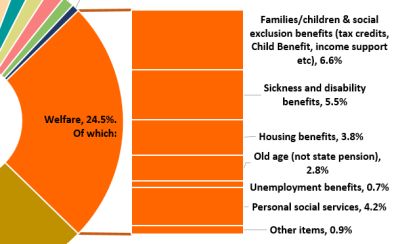 Next a fancy arc, akin to a slice of donut; 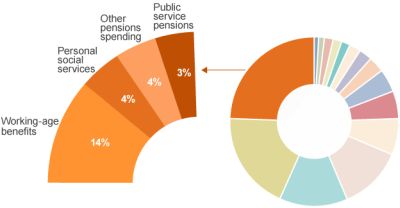 The tactic in general is a winner to memorably zoom in on one component.

I also came across another treatment. From an interpretation of missing tax revenue causes. I like the neatly aligned large figure idea; 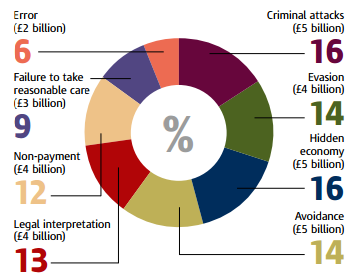 And finally, when it comes to web tips, there’s always the spoofs. This (left-wing) one via Huffington Post (in the list format mentioned above here) shows how you can get a point across in an irreverent way. But as with any application of comedy in the sales arena, remember the health warning that comes with it; 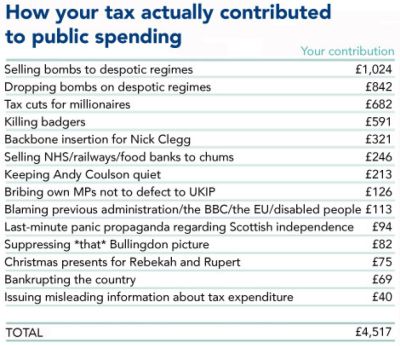