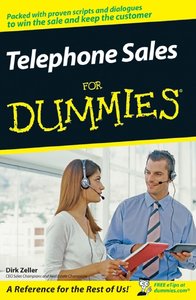 Is it too lazy a review to state the obvious? Namely, that you will become the dummy if you follow this book as best-practice text…

First off, it suffers the self-same fundamental problem that virtually all such instructionals on this topic share.

It may as well have been written by Alexander Graham Bell. So old school in its leanings it is. Put bluntly, effective cold-calling has seen a step-change revolution in the past decade. And this author is unaware of it.

A secondary ill is the sectional breakdowns. Another common failing. Whilst the motivation-preparation-call structure holds some merit, its actual delivery here is equally outdated.

And thirdly, for such a large chunk of the book to wholly mislead on the titular subject matter is criminal. The entire chapters towards the end devoted to face-to-face presentation and (the biggest sin) a buyer-psychology reference framework (‘disc’) is a total shocker.

It’s really difficult to recommend any of it.

A key wisdom early on states; “the best rule anyone can give you in sales is to use scripts”. I’m not making this up.

What about how you introduce yourself? Again, utter misdirection; instead of ‘copier salesperson’ you say, “I’m a document specialist who creates efficiencies and cost savings for companies through proper utilization of office equipment.”

Throughout the entire 250 pages, I managed to note down only a handful of useful items. Many of them no more than mere entertaining Sales asides. None get to the core of telephone selling success. So in the veneer of balance;

achieve “sales call aversion immunity”, one example being his “10 minute strategy” – feeling down? Then give yourself the day off… but only after you’ve done ten minutes on the phone

pre-empt the “11am Rule” that is, both you and your prospect gets their day hijacked by events by this time, so make sure you get the most important work done before it

there’s a general something in his finding buyer’s dna2; desire need ability authority

‘timeworn sales adage’…”Enthusiasm is to selling as yeast is to bread; it makes the dough rise”

And I applaud his anti-“guru” rants; “shatter myth of success without prospecting” – anyone that says you can you must forensically quiz on how much success they’ve actually got

Hardly enough to build a definitive tome around.

None of the book – its scripts included – will make you a superstar teleseller any more than the typical advice to make calls morning, noon and night and adapt what you do as you learn what succeeds.

Which isn’t really that helpful at all, is it.

Beg for an audience, deliver your “7-second” benefit statement, doggedly blast through objections, alternative close the hell out of a next action. Sleep. Rinse. Repeat.

The world of teleselling certainly needs better than that. And this book does not give it.