As you may know from previous blogs, I am not a fan of professional forecasters.

From those telling us what numbers the economy will run in the near future or the barrage of investment sages online and on rolling telly channels, to the more mundane such as sport punditry and weather outlookers. All these shamelessly overpaid soothsayers are no better than flipping a coin or gazing into an actual crystal ball.

I often trot out the old lines that you’re best advised only predicting something after it has happened, and I’ll tell you one thing for sure, I’ve never given a forecast on anything, and I never will. *chuckles*.

So you can imagine my incandescent ire at the endless procession of coronavirus supposed scientists scaring politicians and populations the world over into ineffective suppression policies. Especially when an alternative set now look like they’d have been so much better off for us all.

When they influenced the WHO to say ‘go into lockdown, people’, the liberal elite media are all over it. When later, the same – albeit discredited on many levels – organisation state lockdowns should no longer be the primary go-to tool, they all stay silent. We know who’s side they’re on.

Would you know it, the “doomsters and gloomsters” can’t hold themselves back. Here’s a selection collected by London broadsheet The Telegraph. Listing their horror, raging across primetime airings across the UK, which we now know have all been exposed as utter rubbish. 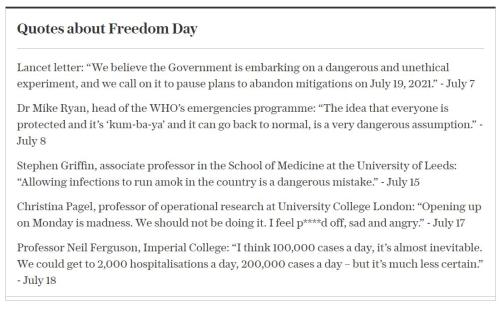 The idiocy of these people is being exposed on many levels. Forget the fact that they still make great money without threat of job loss and love the gleam of the studio light.

One such person to call this out just now may well prove a tipping point.

He’s an American (whom I have mentioned in dispatches before) that’s made a living out of being (slightly) better at forecasting than most. Nate Silver passed comment on the High Priest of Project Fear, Neil Ferguson.

A man who, let’s not forget, completely disgraced himself by first incredible death projections at the outset. Then second, by flouting the very lockdown restrictions he helped impose leading to the sobriquet, Professor Pantsdown.

You wonder if his employer, Imperial College London, adhere to the doctrine that even bad publicity is good publicity. Then again, when the dogma-riven BBC continue to give him unfettered access to their platform, we probably know the answer.

Ferguson was all over the airwaves (I still can’t quite believe it) saying there’d be a pretty much immediate leap to 100,000 recorded infections a day. Doubling down, he claimed this was “almost inevitable”. Maybe even to 200,000.

(And let’s not forget, the vaccine works. The link between infections and deaths, broken.)

As I blog, where I am the country hovers around 30,000 daily transmissions. The number having recently fallen for seven successive days.

And so Ferguson’s response? The pandemic will be over by October.

Quite the turnaround in ten days.

His first murmuring in such direction. Way too late.

Yes, the picture can reverse, but consider the wild unreliability.

From the twitter, here’s part of Nate Silver’s withering assessment;

“I don’t care that the prediction is wrong, I’m sure this stuff is hard to predict. It’s that he’s consistently so overconfident.”

Let’s place that into Sales forecasting.

Our ‘stuff is hard to predict’ too.

Yet I seldom come across efforts to improve potential deal forecasting accuracy.

I often joke (although sometimes in railing fashion) about how much of a missed trick it is that no tv or radio station compares the previous day’s weather forecaster’s unchallenged thirty-seconds of waffle with what actually transpired.

There is zero accountability for these people.

Yet for us, it can be career-affecting.

This also perhaps conveys the slant that the Prof wanted more infections. Clamoured for the pandemic to prolong. Revelled in its enduring presence.

He was wallowing in terrifying numbers.

The term may well have been used rather to signify the attitude of the man in general. To the unshakeable conviction that his figures were correct. Despite being proven as nonsense time and again.

In salesteams there can be those prone to such overconfidence.

As political science author Prof Philip Tetlock is cited in the exchanges;

Yet it is the framework set up which both permits and encourages such smart or otherwise sellers to go so awry.

Also guilty of seeking internal ‘publicity or policy-advocacy games’ you can suspect.

Businesses across the solution spectrum go in for forecasting.

Yet the rules applied are often deeply flawed from the outset.

There is a general malaise of thinking that historically ‘x’ percent of the total funnel comes in, so individual pipelines feed into an overall picture that can give fairly reliable estimates.

Not until you align your forecast to the true process which gives you sustainable, repeatable success will you first experience as accurate a forecast as possible. But even more crucially, now knowing the real levers involved, only then will you be able to improve your win rates properly.

There’s nothing quite like replacing overconfidence with genuine expectation.