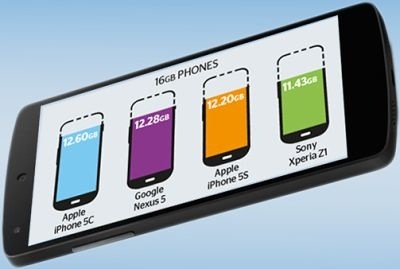 This week consumer champion Which? Magazine uncovered the shocking disparities among smartphone memory.

The above pic is at the top of their research piece. It certainly has impact. Clearly, it seems produced by someone that you’d suspect spends all day long on such niceties.

This kind of graphic is beyond most of our reach. Can you imagine what most sales managers would say if they thought one of their charges was spending prime sales time submerged in Powerpoint for as long as it’d take to produce something similar.

Then you see their next graphic.

This time, it shows the main eight brands. 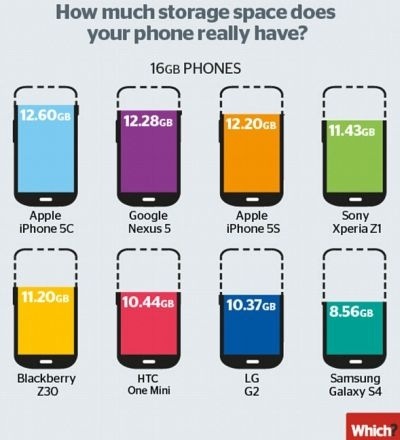 Now. This one holds a real steer for us.

In our b2b solution world, we’re not comparing smartphones. Yet we are probably trying to place ourselves in some particular and perhaps similar decent light.

They way most of us tackle this is with a simple barchart.

Pop a few figures in a couple of spreadsheet columns and play around with the chart wizard.

Why not distinguish yourself like the Which? guys have here?

Whatever number of group you have, once you’ve created the first one, the rest are all copy and paste.

And if you think about it, for whatever you’re trying to compare, there’s probably a simple graphic you can do that can be filled in this way.

In this example, I myself timed how long to conjure something similar. It was remarkably quick.

All I needed to draw were a few rounded rectangles and play with outline patterns and colours.

So what if I could never attain quite the polish of a glossy mag’s graphic designer.

What can still quite ably come up with, will no doubt set my message apart and make it stick in the mind of prospects.

As a footnote, when doing my own version of this, I realised there were two other infographic tactics that could apply. In this case, the creator chose the best for the data I think. Other options though include having one ‘phone’ represent each gig and line them all up in a tower as your barchart treatment. Also you could have one phone that represents 16gb in say grey, then shrink each subsequent one alongside it according to proportion of 16 they actually attain.